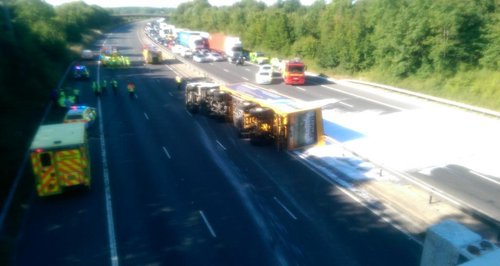 The M11 has now fully re-opened between Harlow and Stansted Airport after a tanker overturned yesterday.

The vehicle was carrying a foam chemical that is used to produce glue.

The accident happened between junction 7 Harlow (A414) and junction 8 Stansted (A120) at around 5pm yesterday.

The road was shut in both directions from the time of the crash until this morning.

Highways Agency Operations Manager, Ian Jobson said: "We have been working throughout the night to ensure the foam is removed as quickly and safely as possible but this is a complicated operation.

The nature of the chemical involved has meant that we have had to ensure none of it reaches the water course and so the clean up operation involves jetwashing the carriageway surface and then using gulley suckers to ensure all liquid is removed and can be safely and environmentally disposed of away from the scene.

We are working as quickly as we can and we would like to thank road users for their patience while we carry out this important work."

At the request of Essex Fire Service a 150 metre exclusion zone was put in place until it could be established that the foam was not releasing toxic fumes.

The Environment Agency were also at the scene until 1am this morning carrying out assessments on environmental impact and drains alongside the carriageway were covered to ensure the chemical did not reach the water courses.