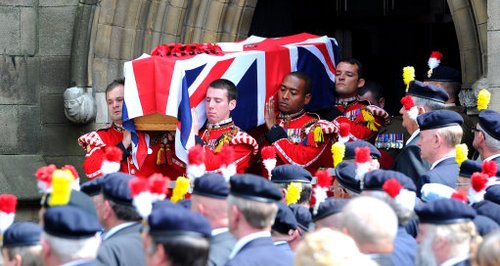 The Muslim fanatic from Romford who murdered soldier Lee Rigby has been sentenced to die behind bars.

Michael Adebolajo and Michael Adebowale were sentenced at the Old Bailey by Mr Justice Sweeney, who had waited for a key appeal court ruling on whole life terms before deciding the men's fate.

Adebolajo, 29, was given a whole life term while Adebowale, 22, was jailed for life with a minimum of 45 years.

The British-born extremists mowed Fusilier Rigby down in a car before hacking him to death in the street in front of horrified onlookers near Woolwich Barracks in south east London in May last year.

They both claimed that they were "soldiers of Allah" and were motivated by the plight of Muslims abroad to carry out the killing, and have shown no remorse.

After sentencing began the two men shouted at Mr Justice Sweeney in protest at his remarks and were pinned to the ground by several security guards and taken back to the cells.