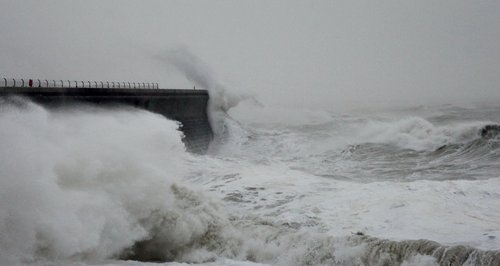 An 85-year old man has died after a Tilbury bound cruise ship was hit by a freak wave in the English Channel.

The Marco Polo was heading for the Essex port last night (Friday February 14th) when water crashed through a window.

A woman in her 70s has been airlifted to shore for treatment and several other passengers were injured.

The vessel, which has been to the Amazon in South America and to the West Indies during its 42-day journey, was due to dock at Tilbury in the early hours of Sunday.

Yesterday the company which runs the Marco Polo, Cruise & Maritime Voyages, said: "CMV regrets to advise that earlier today their cruise ship m/s Marco Polo, en-route to her home port of Tilbury from the Azores, was hit by a freak wave during adverse sea conditions in the south western approaches of the English Channel.

"Our thoughts are very much with these passengers and their families during this difficult time."

Heart has been told 3,400 homes in Essex are without power after winds of up to 60 miles an hour hit the county last night.

A spokesperson for UK Power Networks has said: "We're sorry to everybody affected - we're doing our very best to restore power to all customers as quickly as possible and our engineers will be working round the clock from job to job until all customers have their power restored."

The bad weather is also causing problems on the roads.

The Qe2 bridge is closed and the Highways Agency says it is likely to stay shut until mid afternoon when the winds ease.

Traffic will be diverted but motorists are being told to expect delays.