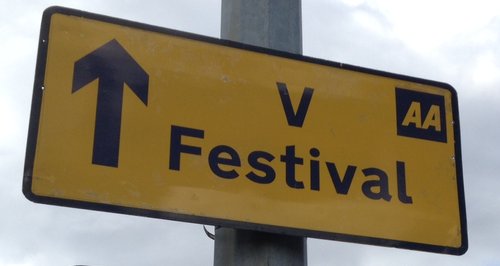 With more than 70,000 music fans travelling to Hylands Park for this weekend's V Festival, you can expect roads in and around Chelmsford to be pretty busy.

Anyone travelling through the area is however, advised to allow extra time for their journey, or to plan an alternative route or time.

The A12 near Chelmsford, the M11 from junctions 7 to 9 and the M25 junctions 29 to 28 are all expected to be much busier than normal;
Margaretting Road (Writtle side of the A414 Greenbury Way) will be closed in both directions from 7am Saturday 20th August to 3pm Monday 22nd August.

The A414 Margaretting Road Roundabout; vehicles won't be able to go around the roundabout on the eastern side from 9am Monday 22nd August until around 3pm. When leaving Writtle village it will only be possible to make a left turn towards Widford. Vehicles travelling from Harlow can't turn right into Margaretting Road.

On the A414 Greenbury Way it will not be possible to turn right into Hylands Park from 5pm on Thursday 18th August until 6am Tuesday 23rd August.

On the A414 London Road (Three Mile Hill, Old A12) drivers won't be able to turn through the gaps in the central reservation along London Road from 5pm Thursday 18th August until 7pm Monday 22nd August. This will be closed to traffic travelling from the A12 to Chelmsford three times during the weekend - from 9pm on Saturday and Sundays until about 3am, and from 8.30am on Monday until 3pm Monday - that's if the volume of traffic still leaving the site needs it.

On the B1002 A12 Slip Roundabout (Webbs Farm Cottages) vehicles travelling north along the B1002 or travelling south on the A12 and exiting on the slip road will not be able to travel underneath the A12 and gain access to the northbound A12 four times during the weekend. These times are from 9.30am on Friday 19th August until 8pm, if the volume of traffic requires it, 9pm on Saturday and Sundays until about 3am, and 9am Monday 22nd August until 3pm.

Writtle Road, Margaretting (from the A12 towards Writtle) will be closed to traffic travelling North from the A12 exit slip (Furze Hill) towards Writtle. This restriction will be in place on Saturday and Sunday between 9pm and 3am.

Extra rail services will also be stopping at Chelmsford as part of the weekend timetable from Abellio Greater Anglia. Extra trains will also run from Chelmsford to London, Colchester, Clacton and Ipswich with last trains departing after midnight on both Saturday and Sunday nights.

Friday 15th August: First Essex will be operating regular shuttle buses from Coval Lane to Hylands Park between 9am and 11pm

Saturday 16th August: Coval Lane to Hylands Park from 9am until 1am

Sunday 17th August: Coval Lane to Hylands Park from 9am until 1am

Monday 18th August: Hylands Park to Chelmsford city centre from 6am until 1pm

Tickets, costing £5, are valid for all four days and available from Dukes Walk bus station.