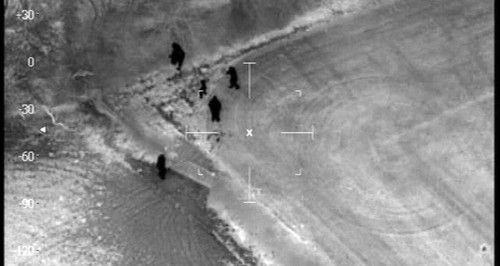 Footage from the police helicopter has been released showing the moment a prolific offender was captured by Devon police.

The incident involving the police helicopter, officers on the ground, a police dog and control room staff resulted in the arrest of a man who was subsequently convicted of a series of offences across the Devon and Cornwall police force area.

The incident took place in Exeter in the early hours of 29 April 2013 after officers in the police helicopter spotted a vehicle acting suspiciously.

After the vehicle failed to stop for police, officers followed the vehicle to Haldon Woods where the offenders set off on foot through the woods before they were tracked down by a police dog. Both offenders were arrested on suspicion of failing to stop and drink driving.

The whole incident was captured on camera by the police helicopter and monitored live by staff in the control room.

Sergeant Olly Tayler, one of the arresting officers, said: "The officers in the police helicopter did an excellent job at guiding us into the right area while keeping an eye on where the men were.

"When the suspects made off through a thick wooded area it made it difficult for the air observers to monitor. The police dog was a huge asset to the team as it led us straight to the men.

"This dramatic footage shows excellent teamwork and communications between all officers involved including the helicopter, control room and officers on the ground.

"It also demonstrates how invaluable resources such as the police helicopter and police dogs are in pursuing criminals.

Dylan Taylor, 29, from Exeter, was sentenced at Exeter Crown Court on 7 January 2014 to four-and-a-half years in prison after pleading guilty to a series of other serious offences including burglary and aggravated vehicle taking.