A number of newspaper adverts have appeared across Devon - but they are scams.

People in Devon are being conned out of thousand of pounds when buying cars that don't actually exist.

Fake adverts for cheap luxury cars are being placed in local papers...

So far 3 people in the area have reported being scammed out of thousands of pounds. One victim handed over 13 thousand pounds for one car.

Click here to listen to our interview with PC Mark Humphries, who's leading the investigation.

Below is one of the typical adverts appearing in our newspapers. 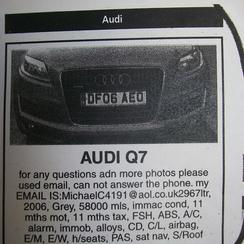