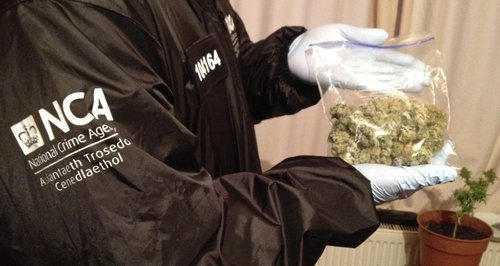 Two men have been arrested after three drugs warrants were executed under the Misuse of Drugs Act in Exeter Tuesday 25 February.

Police officers were supported by officers from the National Crime Agency (NCA) in a new partnership called Operation Assist.

Officers entered three properties in the city at around 6.15am, before arresting two men on suspicion of the production and supply of Class B drugs.

A man and woman, both aged 70, have also voluntarily attended the police station in connection with these offences and are awaiting interview.

Searches are ongoing at the addresses, with the assistance of a drugs dog.

Around 60 officers and staff were involved in this operation in total, with 30 from both organisations.

These include patrol officers and police community support officers to reassure the public, proactive teams to gain entry and detectives to carry out the ongoing investigation.

This is the first time the two organisations have worked together.

A 67-year-old man and 64-year-old woman were arrested on suspicion of fraud and have been released on police bail.

Anyone who has any information about drug-related offences in their area should contact police on 101, or Crimestoppers anonymously on 0800 555 111.