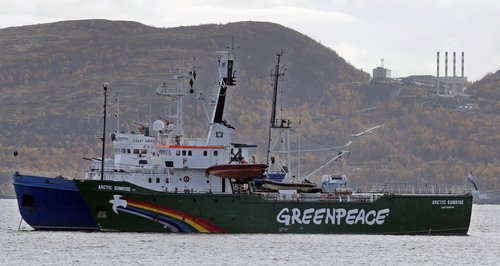 Hopes that the group of Greenpeace activists arrested during a protest in the Arctic - including three from Devon - will be allowed home for Christmas have risen following political moves in Russia.

The Russian parliament has voted for an amendment extending an amnesty to defendants charged with hooliganism, the offence faced by
Alex Harris, Ian Rodgers and Keiron Bryon, and the rest of the so-called Arctic 30

The environmental group said legal proceedings against the 28 activists and two freelance journalists, including six Britons, are now almost certain to come to an end, with expectations that the 26 non-Russians will be free to return home as soon as they are given exit visas by the authorities.

The development follows an international campaign, in 46 countries and 150 cities, to free the 30, who were arrested and jailed in September before being freed on bail last month.

Greenpeace said it was not yet clear when the group will be allowed home, or what will happen to its vessel the Arctic Sunrise, which has remained impounded in Murmansk since the arrests.

Ana Paula Maciel from Brazil, one of the activists, said:

"I'm relieved, but I'm not celebrating. I spent two months in jail for a crime I didn't commit and faced criminal charges that were nothing less than absurd. But now at last it seems like this saga could soon be over and it may not be long before we're back with our families.

Right now, my thoughts are with our Russian colleagues. If they accept this amnesty, they will have criminal records in the country where they live, and all for something they didn't do. All because we stood up for Arctic protection.''

"I might soon be going home to my family, but I should never have been charged and jailed in the first place. We sailed north to bear witness to a profound environmental threat but our ship was stormed by masked men wielding knives and guns.

Now it's nearly over and we may soon be truly free, but there's no amnesty for the Arctic. We may soon be home, but the Arctic remains a fragile global treasure under assault by oil companies and the rising temperatures they're driving. We went there to protest against this madness. We were never the criminals here.''