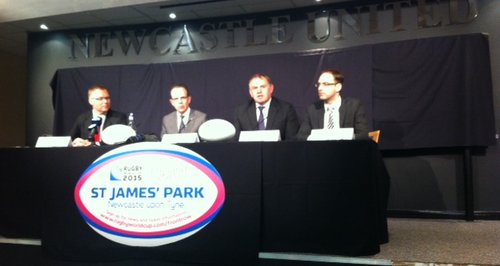 Rugby World Cup 2015 has announced  it needs to recruit 300  volunteers   for Exeter's match venue at Sandy Park, and 50 to 100 volunteers in and around the city and the Fanzone in Northernhay Gardens.

They'll be  known as the Pack... and will be amongst 6,000 volunteers across the country.

Cllr Rosie Denham, Exeter City Council's Lead Councillor for Economy and Culture, said: "This is an exciting and unique opportunity to get involved in sporting history."

Exeter Rugby Club chairman and chief executive Tony Rowe OBE said: "With the Rugby World Cup coming to Exeter next year, we are already beginning to see the excitement levels build in and around not just the city itself, but also the region as a whole.  The volunteer programme offers a fantastic opportunity for local people to get involved in one of the biggest sporting events on the planet.

"I've no doubt that there will be huge interest from local people, all of whom will be keen to promote and assist in showcasing the City of Exeter and the Westcountry as a whole."

The Fanzone will be open for up to 18 days with free entry throughout the tournament, and will show live matches on a big screen, hold a variety of events and entertainment for fans and families, and a wide range of food stalls and beer tents.

Other events will be held elsewhere in the city centre to attract visitors to the city and the Fanzone from the rest of the UK and international visitors.

Members of the general public can register their interest in joining 'The Pack' from today at www.Rugbyworldcup.com/volunteers and details will be sent directly to all those signed up to The Front Row - the official newsletter for Rugby World Cup 2015 (www.Rugbyworldcup.com/frontrow).
'The Pack' applicants must be 18 or over by April 1, 2015 and have the necessary permissions to volunteer in the UK.