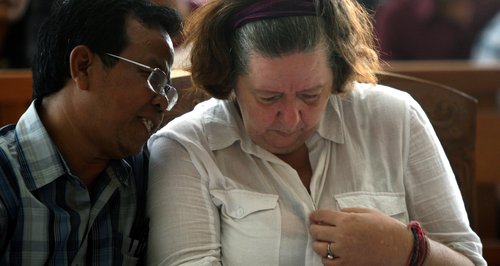 The UK's highest court has called on the Government to carry out an urgent review of whether funding for legal representation can be given in the case of a grandmother from Gloucestershire facing death by firing squad in Indonesia for drugs offences.

Supreme Court justices said 57-year-old Lindsay Sandiford, from Cheltenham, "remains in jeopardy'' and needs a "substantial'' sum to continue her legal battle against the sentence, which was imposed after she was found with cocaine worth an estimated £1.6 million as she arrived in Bali on a flight from Bangkok, Thailand, in May 2012.

Although the panel of five justices dismissed Sandiford's challenge over the lawfulness of a Government policy not to provide funding for legal representation to Britons facing capital charges abroad, they said that in the light of new information a further review of her "extreme'' case needed to be undertaken by the Foreign Secretary.

Lord Carnwath, announcing the decision of the court, said the Foreign Office was prepared to consider whether the policy should be modified in the circumstances of her case as they were in January 2013 when proceedings began - and the reasons for not making an exception to the no-funding policy were not unlawful or irrational.

But he added: "Although that disposes of the appeal, Mrs Sandiford remains in jeopardy. The evidence now available as to the Indonesian proceedings raises serious issues as to the functioning of the local judicial system and its treatment of her case.''

That evidence, which was not considered by the High Court and Court of Appeal when they dealt with her case, "calls for an urgent further review by the Secretary of State of his policy as it applies to Mrs Sandiford in the light of her present circumstances and her present need for legal help''.

Sandiford, originally from Redcar, Teesside, was sentenced to death in January 2013 by judges of the District Court of Denpasar in Bali after being convicted of trafficking drugs. She has since appealed without success. She admitted the offences, but claimed she had been coerced by threats to her son's life. Following her arrest, she co-operated with the police, leading to the arrest of four others - the prosecution had called for a sentence of 15 years' imprisonment in her case.

In a written ruling, Lord Carnwath and Lord Mance said:

"Since January 2013, as a result of the surprising course of the Indonesian proceedings, circumstances have radically developed in respects which appear to have been quite unforeseeable. However, we have no up to date information as to the department's consideration of those matters.

As has been seen, those responsible have been willing to consider whether the policy should be departed from or qualified in her case, but that has been on information which is now out of date.

Logic and consistency, if nothing else, call for an urgent review of the policy as it applies to her in the light of the current information.''

"The evidence now available as to the course of the Indonesian proceedings appears to raise the most serious issues as to the functioning of the local judicial system and its ability to deal justly with the appellant's case.

In particular, on the material we have been shown, the local courts seem to have ignored the substantial mitigating factors in her case, including her age and mental problems, her lack of any previous record, her co-operation with the police and not least the remarkable disparity of her sentence with those members of the syndicate whom she helped to bring to justice.

On the face of it, there is substantial material to support her application to the Supreme Court or the President. She needs a competent lawyer to present it.

It is not, of course, for this court now to express any view as to what the outcome might be of such a review. But we note that, even under the old pre-2007 policy, it appears that the Foreign Office did not experience real difficulty in controlling and limiting the financial exposure which it incurred in a very few exceptional cases.

It is not clear to us that the creation or recognition of an exception for a case as extreme as the present would risk opening a floodgate to future demands for financial support. However that may be, the further review needs to be undertaken, and the outcome to be supported by a clear justification of the rationality and/or proportionality of maintaining an absolutely blanket policy covering even the present circumstances.''

The Supreme Court said the UK Government had provided "substantial'' consular assistance since it was notified of her arrest and had also made diplomatic representations to the Indonesian Government but it had "declined to pay for legal help'' under the policy.

The ruling by Lords Mance, Clarke, Sumption, Carnwath and Toulson follows a Court of Appeal defeat for Sandiford in April last year when three leading judges ruled that the UK Government's policy of not providing funding for legal representation to any British national who faced criminal proceedings abroad - even in death penalty cases - was not unlawful.

In written submissions opposing Sandiford's appeal at the UK's Supreme Court last month, Martin Chamberlain QC, for the Foreign Secretary, said: "The death penalty is among the punishments to which the Government is opposed in all circumstances as a matter of principle.''

It supported initiatives designed to encourage states which retained the death penalty to change their position and makes grants to charities such as Reprieve, which assisted individuals who were charged with capital offences.

In "appropriate cases'' it also made "state to state representations''.

Mr Chamberlain said the statutory legal aid scheme extended only to legal proceedings in the UK, and the Government "has not established an analogous scheme to cover legal expenses for British nationals involved in criminal proceedings abroad, even where the proceedings may result in the imposition of punishments to which it is strongly opposed''.

He told the judges that the policy did not allow funding to be given, even in exceptional circumstances, but added: "However, that does not mean that the appellant's individual circumstances have been ignored.''

Specific consideration was given to the question whether the policy should be changed in the light of those circumstances.

"The conclusion was that the appellant's case could not be regarded as more compelling than many others and that the policy should not be changed to allow payments in this case,'' he said.