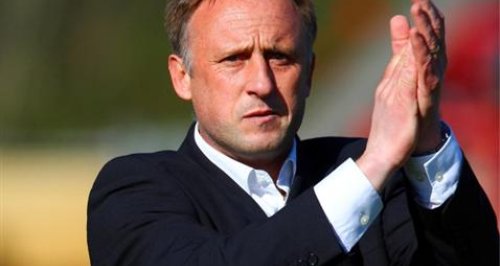 44 year old Yates,  who won promotion as a player with the club, has departed Whaddon Road after nearly five years in charge, which made him the third longest serving manager in English football's top four divisions behind Arsenal's Arsene Wenger and Paul Tisdale of Exeter City.

Chairman Paul Baker says Mark Yates should be remembered as one of the best managers in Cheltenham Town's history.

Yates left the club on Tuesday morning after nearly five years in charge, during which time he guided the Robins to the League Two play-offs for two years in succession. Baker said:

"Mark is a proud man and he was very calm, thanking us for the opportunity. I was also able to thank him for the contribution he has made.
It’s a difficult thing to have to do and not something that I have enjoyed doing. We know what our crowds our, what our budgets are and we are an average League Two club, but we have often fought above our weight.

I can’t fault Mark, who may look back and decide he could have done things better. It’s the first time he has had this experience, but I am sure he will learn from it. He can rightly put himself up there with the most successful managers at this club.
To achieve what he did with the budgets he had and the crowds we had was a huge achievement."

Cheltenham's new manager will be unveiled on Thursday morning and Baker said the club will be appointing their first choice candidate for the role:

"The new manager will be coming in on Thursday, but we are not looking at wholesale changes. Mark was very quick to commend the quality of his backroom staff and how supportive they have been during this whole period. We tweaked it at the start of the season with a new analyst (Craig Cope) and fitness coach (Ian Hutton) coming in. I think its gelled and worked, so we won’t change it.

It’s up to the new manager to get to know the team and stamp his own style on things. It’s not the easiest job in the world and we don’t have money to throw at it, but he’ll come in as prepared as he can be. There are always expectations when a new manager comes in, but it’s still a tough job.

He is our first choice and we are delighted he has accepted our offer and we look forward to introducing him to the press on Thursday and to the fans on Saturday for the home match against Oxford United. We have done what we think is best for Cheltenham Town Football Club. We now need everyone to get behind the new manager and the team."

Cheltenham Town slipped to a fourth-straight defeat at the weekend, 4-1 at home to Wycombe, and have conceded 14 goals in the process.

They currently lie 18th in League Two, 10 points clear of the relegation zone.