Clare's Law: Rolled Out Across Gloucestershire

On Saturday 8th March, Clare’s Law is being rolled out across the UK. It follows a pilot scheme run by Wiltshire, Gwent, Nottinghamshire and Greater Manchester.

Clare’s Law is named after Clare Wood, who was murdered by her ex-boyfriend George Appleton at home in Salford in February 2009. She was not aware he had a history of violence against women.

The scheme aims to give individuals the opportunity to make enquires about their partner if they are worried they may have been abusive in the past.

Third parties can also make these enquiries where they have concerns about a person at risk of domestic abuse. If the initial checks carried out by the police show the partner does have a record of violent behaviour, or there is information to suggest there is a risk, the police will consider sharing those details.

A panel including police, probation, Gloucestershire Domestic Abuse Support Service (GDASS) and other agencies will check every request to make sure it is necessary and proportionate to make a disclosure before trained police officers and support workers from GDASS offer help and support to these individuals.

'Being able to identify potential problems with domestic abuse early on is crucial. Clare’s Law allows this to happen and gives the individual the ability to make an informed choice.

'It also provides a structure to make sure those affected receive the necessary support.'

The scheme is being supported by GDASS.

‘Professionals also have a role to play through the ‘Right to Know’ strand of this scheme.. This will apply where professionals believe an individual is at significant risk of domestic abuse and that person is unaware of the risk. 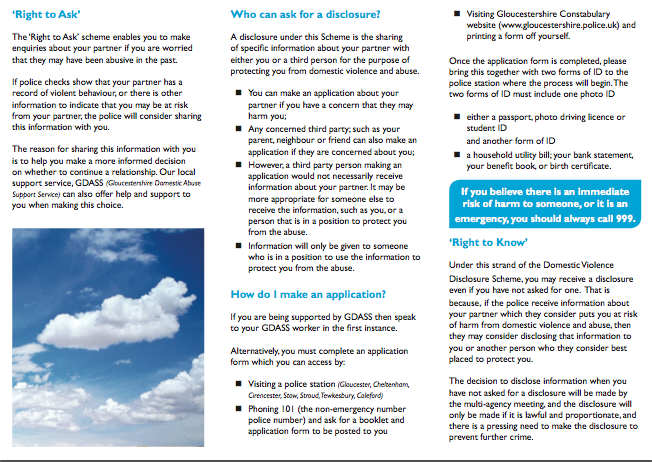