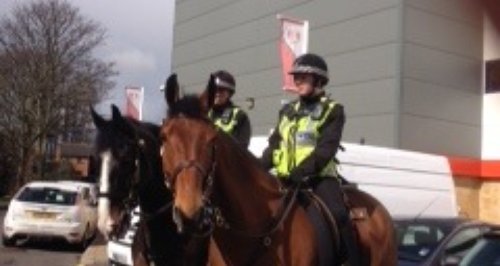 Over the last three months, research teams have been in Gloucestershire as part of a national project looking at the effectiveness of mounted police officers.

During February, surveys were carried out in Cirencester, Tetbury, Kingsholm and Wotton and Matson and Robinswood to find out what people thought of the police.

The next month, seven mounted patrols were carried out in Cirencester and eight in Kingsholm and people were asked the same set of questions. A control study was also carried out in Tetbury and Matson and Robinswood.

The following month the researchers returned to the areas with the same questions to see what impact the patrols had had. In total, 1432 people were surveyed during the three months in Gloucestershire.

A second trial was also carried out by the Metropolitan Police during the same time period, bringing the total number of people surveyed to 2083.

Analysts are now looking at all the results to see if there is a direct correlation between mounted police officers and an increase in public confidence.

However, early indicators from the overall research show:

the experimental intervention - mounted patrols in areas that had not previously experienced them - was successful as an intervention, in that people living in those areas noticed the new police activity.

For example, in the baseline period only 1% of people living in Cirencester said they were aware of recent mounted police activity. After the intervention, 50% indicated this.

80% of respondents who had seen mounted patrols thought their local police were doing an excellent or good job, compared with 73% of those who had not.

DCC Rod Hansen, the national lead for mounted policing, said: "This research is vital in understanding the value of mounted policing in the UK. It does not feel right to lose such a historic and useful capability without fully understanding how sadly it would be missed, and we must ensure that the police service does not inadvertently find itself without a capability it relies upon due to the current financial limitations. That doesn't mean to say there aren't smarter or more cost-effective ways of delivering mounted policing and this research will help sign post those viable alternatives.''

Dr Chris Giacomantonio from RAND Europe and Oxford University is managing the project, he said: "The initial findings are highly encouraging at this stage. Based on observational data, people are six times more likely to notice mounted police officers than foot patrols and the survey shows that seeing mounted police is consistently associated with higher levels of trust and confidence. Of course, this is just one part of a much wider project and we are looking forward to collating all the results and drilling down into the detail."

The final results will be presented at an international mounted police symposium, "Making and breaking barriers" in November.