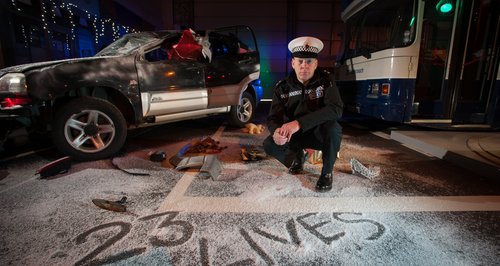 Gloucestershire's SkillZONE was the setting for a dramatic reconstruction showing just how destructive drink driving can be.

The Gloucestershire Road Safety Partnership launched its 2013 Christmas drink drive campaign at the county safety education centre today, where SkillZONE's streetscape was the focus of a car crash caused by the effects of alcohol.

Staff from the emergency services were on hand to explain how fire crews, ambulance staff and police would respond. They were joined by a recently convicted motorist who is willing to share the true effects of a drink drive prosecution.

The consequences of a drink drive conviction can run far deeper than people often think, ranging from imprisonment, to large fines, driving ban for 12 months and a criminal record.

Figures show that, on average, three drivers a day fail a breath test in Gloucestershire, something that is reflected nationally.

In Gloucestershire last year, 2 collisions every single week involved somebody who took the risk of drinking and driving and from these, 31 people received fatal or serious injuries.

Last year, 69 drivers out of 1,835 stopped were arrested for drink driving during December. That is why this year's campaign, Eat, Think, Be Merry, will step up roadside checks in Gloucestershire, with the county's Roads Policing Unit being joined by Special Constables for the first time throughout December.

The campaign will also target places where people buy alcohol.

Chief Fire Officer Jon Hall, who is also head of operations at the Road Safety Partnership, said: ''We're not here to stop people having a good time this Christmas, but we do want them to celebrate safely. Have a drink, but don't get behind the wheel, even if you've had the smallest amount of alcohol as any amount will impair your ability to drive safely.''

Cllr Will Windsor-Clive, cabinet member for fire, planning and infrastructure, said: ''Every year we give the same warning, but there are still people who choose to drink and drive in the county. There's no excuse, so we're urging people to realise it's just not worth taking the chance.''

Inspector for Roads Policing at Gloucestershire Police, Kevin Roseblade said: ''During last year's campaign we arrested 69 motorists. The message is simple - you can't know your own alcohol limit so don't take the risk. The only way to be sure you are safe to drive is to have none for the road. Drinking and driving is a serious criminal offence and is totally irresponsible. Motorists who think they can get away with it this Christmas are likely to face the full weight of the law.''

Nationally, 280 people were killed in drink drive incidents last year, an increase of around 17% on 2011's figure.

Since reporting began, there has been an almost six-fold reduction in the number of people killed in drink drive incidents.