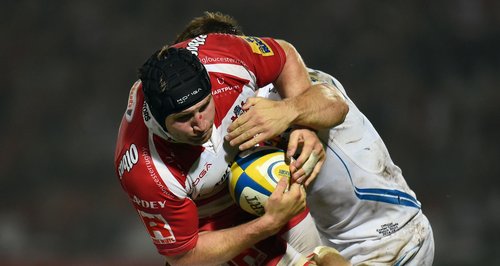 England international Ben Morgan has signed a new contract to extend his stay at Kingsholm.

Morgan, who was named recently as the winner of the QBE Man of the Series Award for his performances for England in the Autumn internationals, is currently in his third season with Gloucester.

Born in Bristol, Morgan started his rugby career at Dursley RFC, but made his breakthrough at senior level with the Scarlets. He could have qualified for Wales under residency rules but opted to play for England, the country of his birth, and has gone on to win 27 caps for his country.

He moved to Gloucester in the summer of 2013 and has already made nearly 50 first team appearances for the club.

Director of Rugby, David Humphreys said; "We're absolutely delighted that Ben has signed a new contract with the club. He's a key part of our plans going forward and it was very important to us to secure his services.

"He's been in excellent form in recent months, both for club and country, and seems to be enjoying his rugby hugely.

"Most importantly though, he is happy with the direction that we're heading in and with our ambitions for the club. He wants to be part of that going forward and we're delighted that he's on board.''

Morgan, himself, confirmed that he's very happy to put pen to paper and able to focus on his rugby. "Having been away with England for a few weeks in the Autumn, it was great to come back to Gloucester and sign a new contract. I'm really grateful to the club for the smooth way it's been handled.

"Everyone knows how much Gloucester Rugby means to me and my family, so I'm delighted to be staying. I'm enjoying my rugby and being part of a talented group of players that are improving week by week.

"I genuinely believe that there is a bright future for the club, and look forward to being part of that. I can now focus on my game and playing my part in the club's future. It's very exciting.''