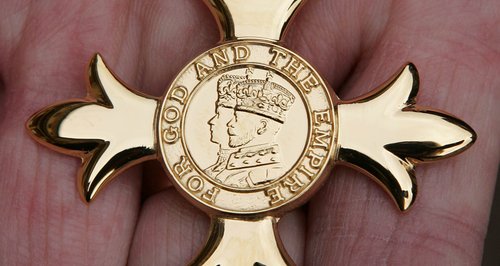 Retained firefighters and the Council Leader, Cllr Mark Hawthorne, have been awarded honours in the New Year Honours list.

There's an OBE for Kathryn Rudd, who's the Principal of the National Star Specialist College, for services to Further Education.

Cllr Mark Hawthorne was awarded the MBE for services to local government. Mark is one of the youngest council leaders in the country and was Gloucestershire County Council’s youngest ever leader when he took over in 2010, at the age of 35. Mark became a Gloucester City councillor for the Kingsholm ward in 1998 at the age of 23. He became Conservative group leader on Gloucester City Council in 2002 and leader of the city council in 2004. He made many changes during his time as city council leader, including orchestrating the long-awaited King’s Square improvements, investing heavily in street cleaning and setting up the Gloucester Heritage Urban Regeneration Company, attracting £200 million of investment into the city.

Mark was elected to represent the Moreland ward of Gloucestershire County Council in 2009, becoming council leader a year later. Since taking over as leader, Mark has been the driving force behind the council’s Meeting the Challenge project to help the council find savings of £114 million over four years. Mark was elected as member for Quedgeley and re-elected as leader earlier this year. He also plays a significant role nationally through the Local Government Association and the County Councils Network.

“I am so delighted that Mark’s contribution to local government has been recognised in the New Year Honours List. He is one of the most capable politicians in the entire local government sector, and has made a massive personal contribution for well over a decade, leading both Gloucester City Council and the county council during this time. It’s been an absolute pleasure for me to work with Mark for the last four years, during a time when we have seen a very difficult public sector funding situation, and some brilliant ideas and leadership from Mark that always put the best interests of local people first.”

Chris Martin commander (retained) of Lydney fire station was awarded the MBE for services to fire and rescue.

Since joining Gloucestershire Fire and Rescue Service as a retained firefighter at Lydney Station in 1974, Chris has worked tirelessly on behalf of the station and town, being promoted to station commander in January 1992. Chris was a key member of the response team on cliff rescue and as part of the co-responder response to medical emergencies in Lydney and the surrounding area. Chris set an example for the rest of the retained section, by becoming a member of the full time staff for GFRS as retained stations liaison manager in 2006. His personal commitment to the station, its staff and the community in providing a response to a wide variety of emergencies far exceeds expectations of a normal retained firefighter’s role.

“Chris has worked tirelessly on behalf of the station and the community in Lydney for many years – 20 of them as station commander. He is a key member of the cliff rescue response team and a co-responder to medical emergencies in the local community too. It is great to see his personal commitment and dedication to his station, its staff and the people of Lydney recognised in the New Year Honours List.”

Mike Houghton, who recently retired, was awarded the British Empire Medal (BEM) for services to the fire and rescue service and the community in Tetbury.

Mike joined the fire service in 1964 at the age of 16 and has spent his entire career in Gloucestershire, as both a retained and full-time firefighter. He completed 30 years whole-time services and has worked as a retained firefighter in Tetbury since 1998. Fires in the summer of 1976 and the 2007 floods were some of the most memorable times of his career. Mike was part of the initial crew at Tetbury to develop co-responding to medical emergencies in the local community, supporting the ambulance service. Mike spends a great deal of time working with colleagues and their families locally to raise money for the Fire Fighters charity and making a positive impact on the Tetbury community.

“This recognition of Mike’s remarkable service is very well deserved. Mike has exceptional fire fighting skills and knowledge, which he has shared with staff at Tetbury station, making a real difference to new recruits. He formed part of the first crew which developed co-responding to medical emergencies to support the ambulance service in local communities too.

Mike has made a real positive impact within Tetbury too, working hard with colleagues and their friends and families to raise funds for the Fire Fighters Charity.”

“I’m really pleased to see these well-deserved New Year Honours going to two of our long-serving retained firefighters. Retained firefighters are dedicated to serving their local communities, and Chris and Mike have really gone above and beyond the call of duty to keep local people safe for many years.”

“It is so rewarding to see the services of our retained firefighters recognised through the New Years Honours. This service forms the foundation for our rural fire and rescue capability, and calls upon fantastic personal commitment from the likes of Chris Martin and Mike Houghton. In addition to their honours award, I really want to record the county council’s thanks for their fantastic service.”