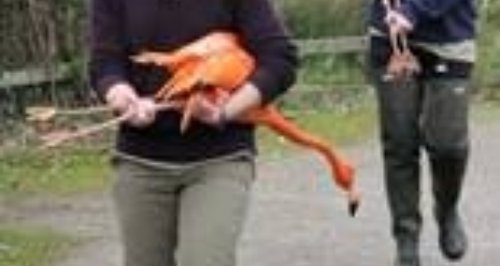 WWT Slimbridge Wetland Centre's famous flamingos have been caught for research aimed at improving our understanding of flock dynamics.

The birds were sexed, ringed and had DNA samples taken, it was the first time the Caribbean flock have been captured since 2002 so records of the younger birds in particular were incomplete. Now with accurate sexing and leg rings scientists will be able to more accurately study the group's behaviour for research aimed at helping other flocks to breed more successfully.

The catch also gave avicultural staff at the wildlife attraction the chance to do a close-up health check on all of the birds in the flock. All 130 birds were processed in under three hours.

''At Slimbridge we're famous for our flamingos but few visitors realise what a key site this is for research into this incredible species.

''We always put our flamingos' care first, so an incredible amount of planning went into this catch to ensure the birds remained as calm as possible during the event.

''The flock responded well to the interruption and they're now looking relaxed just an hour afterwards, which is great to see.''

To catch the flamingos, volunteers and staff formed a human chain and slowly walked them into a penned off area of their enclosure. Then one at a time the birds were carried over to a team which took the feather samples and ringed the birds.

Once examined the birds were then carried into the flamingo house where they were released again. Slimbridge's Caribbean flamingos enjoyed a bumper breeding year in 2013 rearing 13 chicks, thanks to the heatwave at the start of the summer.

Flamingos are very sensitive to flock behaviour, so the research being conducted at Slimbridge is looking at social triggers determining when flocks choose to start breeding. Having flamingos with leg rings makes it possible to keep track of each individual and relate their behaviours to their age and sex among other characteristics.

The research will provide information to other zoos to keep their captive flamingos happy and healthy, which could become important for the survival of the species if wild flamingo populations crash.

Four of the world's six flamingo species are classed as 'Vulnerable' or 'Near Threatened' by the International Union for Conservation of Nature (IUCN). It's thought there are less than 30 breeding sites left in the whole world.

Visitors can see all six species of flamingo at WWT Slimbridge Wetland Centre.