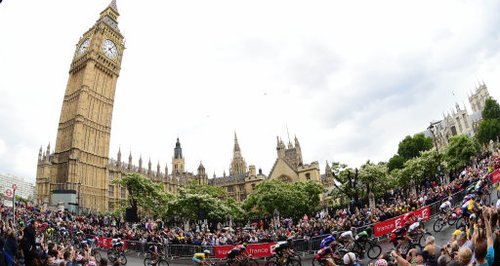 The Tour De France has said 'au revoir' to the UK with a sprint finish to The Mall in central London.

The last of the three English stages ended with the same winner as Saturday's opener in Yorkshire, with Giant-Shimano's German sprinter Marcel Kittel first to the line outside Buckingham Palace.

Not even rain could dampen the spirits as once again spectators turned out in their thousands to cheer on the peloton in the Grand Depart as it made its way from Cambridge through Essex to the finish in London.

He and the rest of the cyclists are due to fly to France tonight ahead of tomorrow's stage from Le Touquet-Paris-Plage near Boulogne to Lille, on the Belgian border.

The stage marked the conclusion of a Grand Depart labelled the best yet and witnessed by millions - Tour director Christian Prudhomme estimated five million people had lined the Yorkshire stages from Leeds to Harrogate and from York to Sheffield.

Today's 155-kilometre route started in the world famous East Anglian university city at about 12.15pm with the riders passing King's College before the race start in nearby Trumpington.

The 197 riders passed through picturesque villages in Essex shortly after 1pm as thousands of people lined the route.

The peloton raced near Mark Cavendish's Essex home, but the partisan crowd were deprived of the 25-times stage winner's presence by his withdrawal with a shoulder injury sustained on stage one in Harrogate.

Margaret Wood, 57, who made the journey from Cambridgeshire, said: "I was hoping to avoid the huge crowd in Cambridge but it's just as packed here.

"We'll have to make a lot of noise to show Yorkshire that we won't be outdone."

Earlier a man in his 60s spectator was airlifted to hospital in Basildon in a serious condition as crowds gathered in the heat in Finchingfield, Essex, to await the riders.

Crowds then cheered on the Tour de France cyclists from under umbrellas as the racers tore through the closed roads of central London.

Geoff Joy, a cyclist who also watched the Tour when it last came to London in 2007, said it was "bigger and better" than seven years ago.

He said: "It was great, really well organised and attended as it always is. I think the crowds were even bigger this year. It was all just bigger and better."

Fellow spectator Ryan Whalesby added: "It was exciting, it started to rain a little bit which obviously puts a bit of a damper on it and they're gone in a shot when they ride pass but it's a good feeling. It's worth the wait.

"Everyone's friendly, a good turn-out and a great day. It shows that cycling and sport is getting more and more popular."

Kittel was followed to the line by Cannondale's
Peter Sagan in second, with Cavendish's Omega Pharma-QuickStep team-mate Mark Renshaw third.