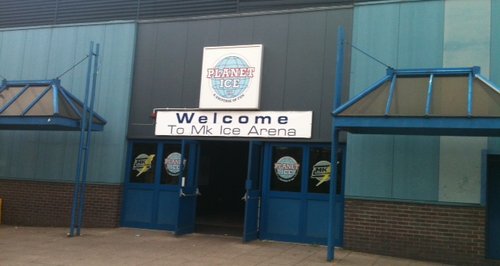 Milton Keynes' Planet Ice rink has closed so it can be redeveloped and a new Morrisons supermarket built alongside it.

The new revamped ice rink is not expected to open before summer 2014, and it could be autumn 2014 before the new centre is ready.

The Milton Keynes Lightning ice hockey team will play their home games at Coventry while the rink is redeveloped.

A new Morrisons supermarket is due to be built on the site of the old Phoenix gentlemen's club and the old Empire nightclub, which has been derelict since it closed in the early 2000s.

The Mega Bowl ten-pin bowling alley closed on Sunday 30 June 2013, and that will not return.

The revamp will see a new entrance to the ice rink built on the Avebury Boulevard side of the building. That's the one facing the Milton Keynes Central railway station.

A notice on the Planet Ice website reads as follows:

"We are sorry to have to inform you that our Milton Keynes rink has now closed due to re development and will be re-opening late summer or early autumn 2014.

"We will ensure we keep you up to date with information on the exciting developments for Milton Keynes.

"In the meantime Planet Ice would like to thank all its Milton Keynes customers for their continued support and valued custom over the last 15 years or so and we hope to see you at another Planet Ice soon.

"All these facilities offer excellent Learn to Skate lessons for Adults and Children, After School Skate sessions, Parent and Toddler, Friday and Weekend Disco sessions plus daily Public Skating.

"These rinks will also be available throughout the Summer for Learn to Skate in 5 Days, and public skating Monday - Friday from 10 till 4pm."