MK: Work Starts On A421 Widening 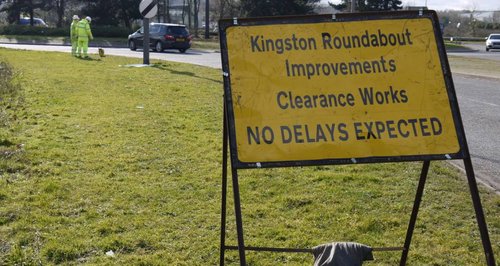 Following a successful £8.81m bid for government funding - work's now starting to clear 'bottleneck' on the A421 to and from the M1.

Milton Keynes Council are now clearing the areas around the A421from Fen Farm to Eagle Farm roundabouts ahead of this busy stretch of road being widened into a dual carriageway.

The site clearance work will take place outside of peak hour traffic to minimise delays. Main construction work is expected to run from July 2014 to mid-2015. The site clearance taking place now will help to protect wildlife, particularly birds before they start nesting.

At the same time, the Kingston roundabout will also be improved by enlarging a signalised junction and widening stop lines to accommodate three lanes. Work is expected to start in April 2014.

The schemes will cost around £17m in total and the remainder of the funding will come from developer contributions.

Milton Keynes Council Leader Cllr Andrew Geary said: "This particular stretch of road is a key strategic route for Milton Keynes because of the proximity to Magna Park and the M1, and it will also serve the future developments north and south of the A421.

As such it's very important that we seek all available opportunities to bid for funding and other support to keep investing in local infrastructure.  Improvements to the A421 such as this, which will help to keep Milton Keynes a thriving economy."

Cllr Nigel Young, Executive Member for Strategic Planning and Economic Development at Central Bedfordshire Council, said: "Central Bedfordshire Council are delighted that pinch point funding has come forward to allow these improvements to take place to the Kingston Roundabout and a section of the A421 within Milton Keynes. These works are vital in going a long way to reducing the current congestion that occurs along the A421 from M1 Junction 13 and A5130 from Woburn Sands."

Cllr David Hopkins, ward member for Danesborough told Heart: "I'm delighted that the work is now starting on site to improve the A421. It's a busy road and dualling the highway will make a real difference to local congestion. Hopefully we'll receive further funding to make additional improvements as Milton Keynes continues to grow."