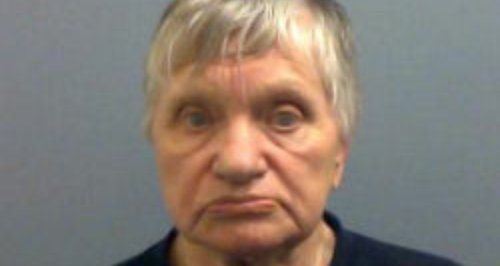 Sheila Sampford, 75, described in court  as a loving and faithful wife during her 50 year marriage to her husband, was given the life sentence and told she will have to serve a minimum term of 9 years in jail before she can be considered for parole

In rejecting the wife's claims that she had strangled her 83 year old husband John to end his suffering, Judge Richard Foster he had no doubt that she had "snapped" while under enormous pressure caused by his losing battle with leukaemia, her own health problems and worries for the future.

But in passing the sentence today at Luton crown court, the judge told the grey haired pensioner who walks with a stick "All the mitigating factors don't retract from the evil of what you have done. You took away a man's life prematurely. There was clearly some hope he might survive for some months. The treatment seems to have been going well. He was positive."

Because the mother of one, who is being held in Peterborough jail, had admitted the murder at an earlier hearing, a life sentence was the only sentence she could be given in law.

But if the judge had found she had committed the offence as an act of mercy, she could have expected a low minimum sentence before being eligible for parole.

The month before he had been told he had leukaemia and had just a few months to live.

Mr Moore said: "At 6.26 in the morning the defendant dialled 999 and spoke to the operator for 10 minutes. The call begins: 'I just murdered my husband'!"

She went on: "I just strangled him. Well he has got acute leukaemia  and two to three months to live. I am his carer. He was my carer.
I just don't know what I did. Oh please help me. "I have had two major operations. I just don't know if I am coming or going. I can't think straight. It has all got too much. I said to John 'I am going to strangle you' and he said 'yes please'. Those were his words.

While Mrs Sampford was speaking to the operator the police arrived at the house. She opened the door in her dressing gown and the officers found her husband upstairs lying on the bed.

"Two pillows were on top of each other over his head. His body was warm. The officers saw a bandage tied around his neck and blood on his face. They tried chest compression. Paramedics arrived and continued the resuscitation, but it was too late and at 7.12 death was confirmed," said the prosecutor

Mrs Sampford was arrested for murder. In the custody suite at the police station she said: "I just snapped. I had to do it. It was a cry for help."

In her cell she told the watch officer: "I am guilty. I have nothing to hide."

Mr Moore said that the judge would have to decide if Mr Sampford wanted to die as a result of his leukaemia, if he had asked the defendant to kill him and if she was motivated by compassion in an act to mercy to end his suffering.

He said the couple had married in September 1963 and had a daughter Caroline Vant who was born in 1968. The daughter had described her mother as the dominant partner in the relationship. The mother had a long-standing problem with a foot and had undergone a number of operations. On June 6 last year Mr Sampford had been diagnosed with leukaemia.

Mr Sampford took the news that he had only 3 to 12 months to live "extremely well. "Later that month the prognosis worsened and he was told he had 3 to 6 months to live even if he had treatment. He continued to be positive and thanked the consultant, said the prosecutor

His wife was anxious about their dog and spoke to a rescue centre saying she could no longer cope with it. The day before she killed her husband she rang her daughter and said: "Can you come over, Dad's ill. I am ill. I can't cope." When her daughter arrived she said: "I can't cope. Your dad keeps going into the garage and standing there."

In court today Sheila Sampford, who gave her evidence wearing her wedding ring said her husband John's final words to her as she strangled him were: "I love you."

As he lay in bed the wife said she put a bandage around his neck and pillows over his head.

She went on "I woke up in the early hours of the night and we'd been talking about ways of taking his life. He just wanted to be released. It was a horrifying experience. It was the worst thing I had done - taking the life of someone you love and adore."

Under cross examination she said: "I took John's life because it is something we had decided, to end his suffering. It was through love and devotion. It was not selfish, it was out of love and devotion to him and anything to put him out of suffering. John woke up and said 'Now is the time.' I agreed and strangled him."

Crying, she said: "My husband did not struggle. His final words were 'I love you'. I wake up and hear those words. He laid there and was relieved. There was no sign of a struggle he remained very peaceful and quiet."

After considering her account, the judge said he was driven to the conclusion the murder had been committed not as an act of mercy, but because she had "snapped" in the early hours of that morning due to the considerable stress she was under.

Her barrister, John Price QC told the court "This is a lady who faces the prospect of spending the rest of her life in prison. I ask Your Honour to leave her some hope for the future."

The judge told Sampford it was clear her husband had taken the news well that he was terminally ill and had just a few months to live.

He had even thanked medical staff for being truthful and said it gave him time "to put his affairs in order."

Hudge Foster said John Sampford had given no indication that he wanted to end his life.