300 more jobs are being promised at the Lotus Cars Factory in Norfolk after a £10 million pound grant from the government.

Secretary for Business, Vince Cable has been visiting the factory this afternoon as part of the announcement of the extra cash for the site.

The money from the Regional Growth Fund is being given with the assurance it'll be spent to create 300 new jobs over the next few years.

The company has been going through a tough time over the last few years with dozens of jobs being lost.

The application to the Regional Growth Fund was originally approved in 2011 under the companies last CEO Danny Bahar, but that was before the company found problems with it's finances and raised concerns about how it was being managed.

Now, two years later and with a new plan for the money the government have finally agreed to let it go ahead. 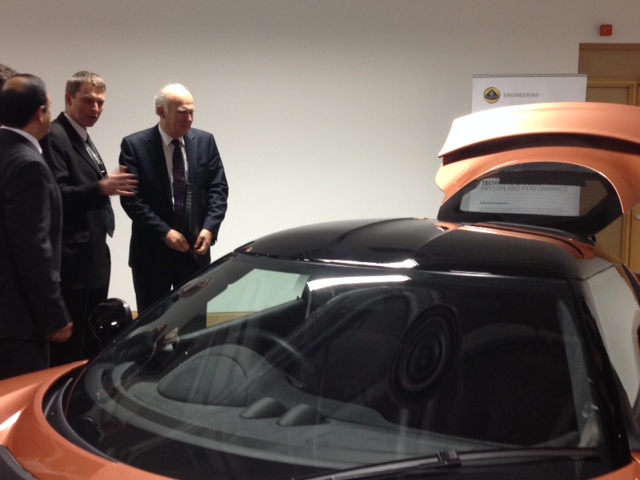 A £100 million has also been invested in the country's future by shareholder DRB HICOM and Vince Cable pointed to this and the givernment grant as signs the future of Lotus was becoming more stable.

Business Secretary Vince Cable said: “Lotus is an iconic British car maker, with some of the most innovative engineers in the business. The car industry is one of Britain's great success stories, employing over 130,000 people and helping to build a stronger economy by contributing £11 billion a year. The Government's industrial strategy is working and giving business the confidence to invest, creating more high skilled, long term jobs in the UK.

"I am pleased to announce today that our flagship economic plan to create jobs outside of London - the regional growth fund - is awarding Lotus a £10 million grant which will help them develop their next generation of cars and create over 300 new jobs in East Anglia. The Government has already supported over 400 projects with £2.6 billion from the Regional Growth Fund, promoting growth in regions across England. The latest round is still open for another two weeks and I'd urge all businesses with a plan to support jobs in their local areas to apply"