A11: £50million Plans For Thickthorn Bypass

There are £50 million pounds to bypass one of Norfolk's busiest roundabouts.

At the moment traffic going down the A11 is forced to cross the Thickthorn roundabout, but a new road could be built so they can go around.

But it's expected to be 2 years before the plans are finalised. 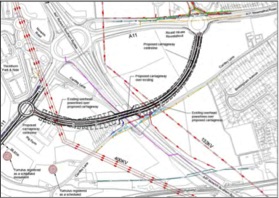 The improvement to the junction is part of the Norwich City Deal proposal.

The early plans for the new layout have been put together by the County Council and they've estimated doing the work could cost between £30m and £50m.

The next stage in the planning and feasibility work will cost between £800k and £1m and will take about 2 years to complete.

David Harrison, Cabinet member for Environment, Transport, Development and Waste and Chair of the A47 Alliance  said: "The County Council recognises the crucial importance of the Thickthorn junction and is keen to see improvements in capacity made, given the growth agenda for Norwich in the years ahead. We have therefore commissioned further work by Mott Macdonald to underline the importance the County Council attaches to the junction to support further dialogue with the Highways Agency. At a time when funding is at a premium, we will keep up the pressure to ensure that Norfolk receives its fair share of funding to allow our economy to grow in a managed way."