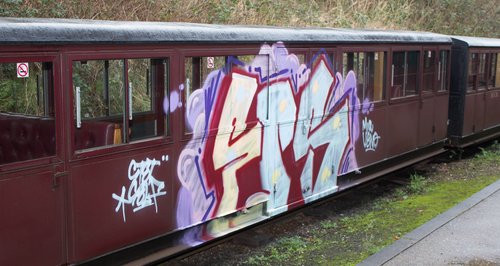 Police are releasing pictures of the damage done to a carriage on the Bure Valley Railways at Aylsham.

The incident happened between 8.30am on Wednesday and 8.30am on Thursday (29/30 January) when someone entered the station from the Bure Valley Walk after climbing over a 4ft fence.

Offender(s) have then sprayed graffiti on the side of a railway carriage and police believe this could be linked to a similar incident which happened at Sheringham on the Poppy Line overnight on Tuesday 14 January when a restaurant carriage was damaged.

Police would like to hear from anyone who may have seen or heard anything out of the ordinary in the area between the times stated.

Anyone with information should contact PCSO Brian Levy at Aylsham Police Station on 101 or call Crimestoppers anonymously on 0800 555 111.