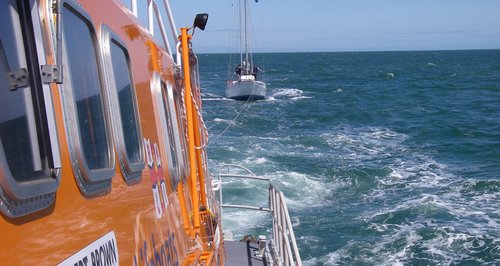 Two fishermen have been rescued after their boat overturned last night off the coast of Norfolk.

They had to be pulled from the water after their boat overturned as it was being towed to safety.

Humber Coastguard was first contacted by the fishing boat just before 5.45pm this evening via VHF Channel 16. They reported that they were taking on water just off Hemsby Gap.

The Caister lifeboat was launched and met up with the boat and managed to get them under tow. But as they were making their way back to shore, the boat overturned with the two on board ending up in the water. By this time, the Winterton Coastguard Rescue Team along with the Gorleston all-weather RNLI lifeboat had been sent to assist.

Caister lifeboat crew managed to pull the two from the water, who were both wearing lifejackets. They were said to be shocked but otherwise unhurt. The boat was towed to the beach at Caister, where they were met by the Winterton Coastguard Rescue Team and an ambulance crew.

"It’s unclear at this time what happened to cause this fishing boat to take on water and then overturn. However, the fact that both men on board were wearing lifejackets meant they could be pulled from the water quickly.

"It’s also essential for boats to make sure they’re fitted with the necessary communications equipment so in an emergency, you can quickly raise the alarm. Where possible, all vessels should be fitted with VHF digital selective calling (DSC) radio equipment which can send a distress alert and, if linked up to GPS, an accurate position of your vessel to the Coastguard with one touch of a button.”