Police are currently dealing with a single helicopter crash in the Cley area, on the North Norfolk coast.

The crash happened at around 7pm last night and there have been four fatalities.

Officers are still on the scene, with a 400 metre area cordoned off.

A spokesman for the Royal National Lifeboat Institution (RNLI) said: "We were asked for three lifeboats to respond to reports that an aircraft had possibly ditched in the sea.

"Lifeboats Wells, Sheringham and Cromer were launched at the request of the coastguard but were stood down when it was confirmed that the aircraft had come down over land."

The investigation into the crash is continuing in daylight today. Police have just held a press meeting giving further details about the crash.

The investigation by the US and UK military is expected to go on for some time.

US military officials have confirmed that the names of the airmen killed in the crash will be released 24 hours after their next of kin have been informed.

Police have now confirmed that four have died in the crash. No further information will be released until the families have been informed.

A 400m cordon remains around the crash site which lies to the west of East Bank in marshland between the A149 and the coastline. A second helicopter from RAF Lakenheath was also in the area at the time of the crash and set down on the marshes to try to help, the aircraft is still on the scene.

The A149 remains closed through Cley; access to Beach Road and East Bank is also restricted and there is no coastline access to the crash site.

Officers are expecting the investigation into the crash to take a number of days to complete.

"I would like to pass on my condolences to the family, friends and colleagues of those US Air Force personnel who have sadly lost their lives in this tragic incident. Emergency services, the military, partner agencies and volunteers have been working through the night to deal with this difficult situation on our coastline and I would also like to thank them for their professionalism and resilience.

"As our inquiry moves on today and the recovery of the aircraft begins, I would urge the public to stay away from the area – the cordon and road closures are in place to allow our experts to carry out these processes safely and there is no risk to members of the public if this section of marshland is avoided.”

Superintendent Roger Wiltshire said: "The helicopter had a crew of four and sadly at this time we believe that all four crew members have died.

"We will shortly be making an assessment of the scene to make sure it is safe.

"We believe there is some ammunition on board the helicopter.''

A 400m cordon is expected to stay in place around the scene for up to 24 hours.

He added that investigators will "do what they can tonight'' but some tasks may need to wait until the morning.

The US Air Force will be involved in the investigation, Mr Wiltshire confirmed.

He added that the aircraft came down on the marsh.

The crash is thought to have taken place at around 7pm this evening in the A149 Salthouse area on the North Norfolk coast.

The helicopter's been confirmed as a USAF Pave Hawk HH60 helicopter from RAF Lakenheath and four occupants are thought to have died. Next of kin will be informed before further details on the victims are released.

It's not believed that anyone in the surrounding area has been injured. However, there remains a 400m cordon around the site, which is standard for this type of incident, whether civil or military. An assessment is still being carried out around the munitions which may be on the aircraft and advice from the military is being taken.

Reports that the helicopter was a Pave-Hawk have now been confirmed by the US Air Force.

There are reports that the helicopter involved was a US military Black Hawk from RAF Lakenheath in Suffolk. 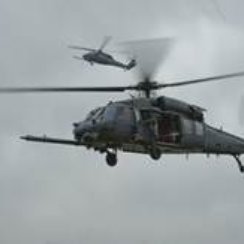 Richard Kelham, chairman of Cley Parish Council, said: "It looks as though the military helicopter has come down in the middle of the bird reserve. The incident is very sad.''

Police have said residents can stay in their homes but pedestrians and motorists are being diverted away as there's live ammunition on board, which could pose a threat to the public.

A number of cordons are in place, closing nearby residential streets.

Around a dozen emergency vehicles from the fire brigade, coastguard and police are at the scene.

Cley artist Rachel Lockwood, from the village's Pinkfoot Gallery, said: "We had never seen so many police cars and fire engines, so went to have a look.

"The beach road to Cley is sealed off. There are lots of fire engines near the Dun Cow pub at Salthouse. A helicopter is hovering over the marsh with a light beaming down.''