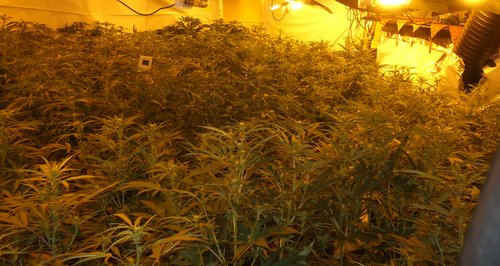 Police have found half a million pounds worth of cannabis after searching an address in Henley Road on Friday.

Officers searched the property at 10am on Friday and found around 1,500 cannabis plants in 13 rooms.

The police have spent the weekend gathering evidence and removing plants and equipment from the property in what they are calling 'one of the largest' finds in the county.

Two men were arrested on Friday in connection with the discovery.

Blerim Mema, 21 and Graci Fekolari, 29, both of Henley Road were then charged on suspicion of cultivation of cannabis and abstraction of electricity and appeared at Ipswich Magistrates Court yesterday.

"This was a very significant cannabis factory. Early estimates suggest the amount of drugs that have been found would have a street value of at least half a million pounds. It is certainly one of the largest factories discovered in the county and we’re pleased that it has now been shut down.

"If anyone suspects that a property near them is being used to cultivate cannabis then please contact police immediately on 101.”

Police are reminding people of the possible signs of a cannabis factory in their area:

- Covered up or blocked up windows.

- Comings and goings to a property at all hours.

- The constant buzz of ventilation.

- The strong sickly smell given off by cannabis plant.

- Lots of power cables that could possibly link up to lamp posts so that they don’t have to pay for the large amounts of electricity they use.

If you suspect there is one near you please phone the police on 101 or call crime stoppers anonymously on 0800 555111.