Police have released a CCTV image of two women they want to speak to after around £4,000 worth of jewellery was stolen from a shop in Ipswich.

It happened in Upper Brook Street at approximately 4.30pm last Thursday (1st May).

Two women entered the jewellery shop and both tried on various items of jewellery.  Whilst the shop assistant was distracted, one of the women reached into a cabinet and stole a tray of rings and placed them within her bag.  The other woman paid for an item and both left the store.  It was then noticed that the tray of rings was missing. 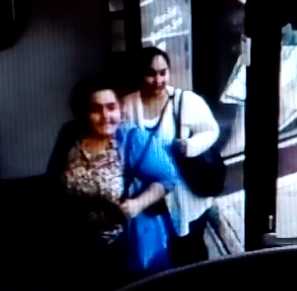 The first woman is described as between late fifties and early sixties in age, approximately 5’6” tall, had brown coloured hair tied back, had a number of gold teeth, was of a large build and was wearing a blue cardigan, floral patterned top, long denim skirt, black leather open toed sandals and red socks.  She was holding a small handbag.

The second woman is described as in her late twenties to early thirties in age, approximately 5’6” tall, of a large build, had dark coloured hair tied back, had two gold front teeth and was wearing a white cardigan, dark coloured trousers and was carrying a large handbag.