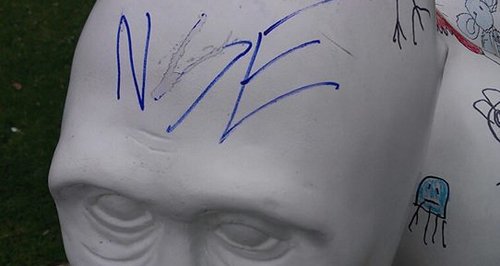 There has been an angry reaction on Facebook and Twitter after one of the GoGoGorillas in Norwich was vandalised.

The damage was first spotted on the gorilla positioned in Chapelfield Gardens on Friday after someone who graffiti tags onto it.

Since then there has been a backlash on social media with people following a #protectthegorillas hashtag and being angry that someone would vandalise the artwork.

There are 53 of the GoGoGorillas dotted around the city and thousands of people have been picking up trail maps and getting photos taken with them.

Project manager Martin Green from Break said 'hopefully this will act as a catalyst for people not to do this in the future because by bringing all these gorillas to Norwich, not only is it bringing lots of people into the city but it is also putting lots of smiles on people's faces.'

GoGoGorillas is a charity art trail with the proceeds of the event going to children's charity Break and the Born Free Foundation.