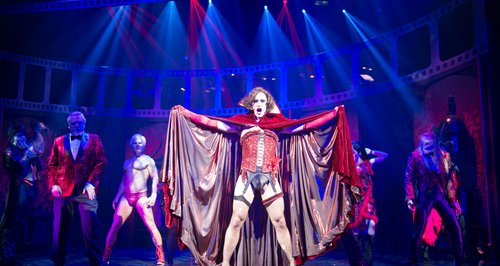 The 40th anniversary tour of the Rocky Horror Show has arrived in Norwich bringing with it the traditions of cross-dressing and heckling.

The 40th anniversary tour of the Rocky Horror Show has arrived in Norwich bringing with it the traditions of cross-dressing and heckling.

Star of stage, TV and ice-rink Sam Attwater takes on the role of Brad Majors. Sam first shot to fame playing Leon Small in EastEnders before leaving Albert Square to compete in (and eventually win) Dancing On Ice. He has also appeared in West End musicals like Tonight's The Night and 20th Century Boy, as well as releasing his debut EP Breaking Boundaries.

Heart reporter Lauren Hewitt caught up with Sam and his co-star Oliver Thornton (Priscilla Queen Of The Desert) who takes on the lead role of Frank 'N' Furter. Hear what they had to say about the city, our accents and what we're like as audiences:

Sam is staring opposite Tracy Beaker and Strictly Come Dancing's Dani Harmer, who will take on the role of Janet.

The Rocky Horror Show has been performed in more than 30 countries and translated into more than 20 languages.

It follows the story of college kids Brad and Janet and includes classic songs like Sweet Transvestite, Damn It Janet and the iconic Time Warp.