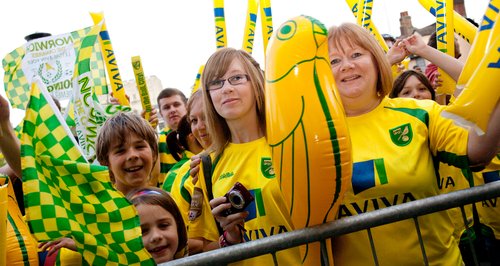 Norwich City's players are to reimburse the admission price for all of the Canary fans who travelled to South Wales to watch the 3-0 defeat to Swansea in last Saturday’s Barclays Premier League clash.

The squad decided to make the gesture as a special one-off thank-you to the Yellow Army for their fantastic support home and away this season.

With crucial games coming up against West Bromwich Albion at Carrow Road on Saturday and Fulham away on April 12, Club Captain Russell Martin says the players know the passionate backing of the City fans will be a vital factor.

A total of 899 paying City fans were at the Liberty Stadium, with most of them making the 612-mile round trip to support their team at the Premier League ground furthest away from Carrow Road.

Russell Martin said the whole squad got together this week and decided to repay every fan’s admission price to the game, as a heartfelt gesture of recognition and thanks.

Martin commented: “Our fans have been brilliant home and away this season and the numbers we get on the road are really impressive when you consider how far they have to travel up and down the country from Norfolk.

“All the lads really felt for the fans at the end of Saturday’s game, with most of them facing something like a six-hour drive home. Hopefully this will help them with the cost of travelling to our next away game at Fulham.

“These next few games are obviously vital and the support and the atmosphere at our recent win over Sunderland at Carrow Road made a massive difference. So hopefully they’ll get right behind us again this Saturday when we play West Brom, at Fulham and in all of our remaining games, to help us finish as high up the table as possible.”

The price for the Swansea game was reduced to £20 for adults and £10 for concessions as part of a reciprocal arrangement with Swansea. Fans who bought tickets from the Club for the Swansea match via credit or debit card will be automatically reimbursed on to their card. Those fans who purchased from the Club via cash or cheque will be sent their refund by cheque.