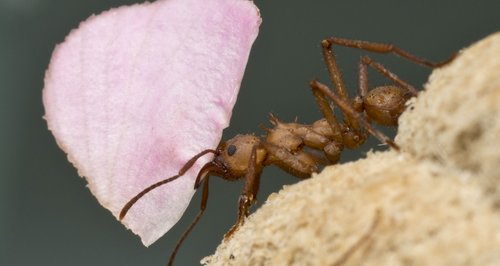 The researchers are telling Heart they are not only powerful but also circumvent a primary cause of resistance to chemotherapy.

Lead researcher Dr Matt Hutchings will talk about his work at the Society for Applied Microbiology Summer Conference in Cardiff today. The work is inspired by nature’s 'fungus farmer', the leaf cutter ant.

Dr Matt Hutchings and his team have been studying a type of antibiotic that is produced by bacteria that live in symbiosis with leaf cutter ants. They have identified the genetic pathway involved in producing the antibiotic, opening the possibility to use this natural product as the basis for new drugs, including anti-cancer treatments.

Dr Hutchings, from UEA’s school of Biological Sciences, said: “We’re using genetics to understand how the drugs are made in the bacteria so we can tweak the characteristics in favour of anti-cancer action, whilst protecting healthy cells.'

“What’s particularly exciting is that the way the drugs work actually tackles one of the main causes of resistance to chemotherapy. In fact, the harder the cancer cell tries to overcome the chemotherapy, the more effective the drug is!”

Resistance to chemotherapy often arises because cancer cells produce proteins that prevent apoptosis, or ‘cell suicide’, that would otherwise be triggered by the treatment. But antimycins actually inhibit the action of these proteins, allowing apoptosis to continue unhindered.

Dr Hutchings said: “Although scientists have known about these antibiotics for more than 60 years, we’ve only recently identified two genetic pathways that are involved in making these molecules and we’re looking for still more.”

Work by organic chemists has shown that antimycins can be altered to inhibit their harmful characteristics and promote the useful ones. Specifically, they can be very toxic to all cells because they interfere with fundamental metabolic processes, but it’s possible to dramatically reduce this effect by altering their chemistry.

Dr Hutchings’ team aim to make these changes through genetics so that the drugs can be made cheaply and on a large scale using bacteria in fermentation tanks.