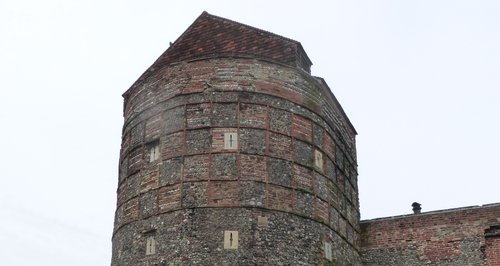 Some medieval defence towers in the town wall are going to be converted into holiday accommodation.

Great Yarmouth Preservation Trust is about to submit plans to convert the South East Tower, off Trinity Place, into a fitting place for heritage tourists to stay while visiting the borough.

And if the experience proves popular with history fans, Great Yarmouth Borough Council, which owns 10 of the 11 surviving towers, hopes to continue to work with the trust to convert some of the others, seven of which have remained largely intact and are currently unoccupied.

Great Yarmouth Town Wall, now a Scheduled Ancient Monument, traces its origins to 1261, when King Henry III granted permission to enclose the town with a wall and ditch.

Great Yarmouth Borough Council has earmarked in the region of £100,000 to convert the South East Tower, which is most at-risk, followed by the North West Tower, near the White Swan pub. It is hoped the first conversion will be completed by the summer.

The tower, last used by the nearby Potteries Museum some years ago, has changed little over the centuries, still boasting arrow-slits, a stone basement well, and a balcony offering views across historic Great Yarmouth to the seafront. It is also set in one of the best-preserved sections of the wall.

Darren Barker, the borough council’s principal conservation officer, who is also the preservation trust’s project officer, said: “This conversion is a hugely exciting project, which aims to bring some of the borough’s medieval heritage back into use, attract more heritage tourists to the borough, and thus support the local economy.

“The ethos of all work will be light-touch, preserving the historic charm and character for holidaymakers. And the South East Tower is perfectly situated for heritage tourists – very close to the Potteries Museum, Time and Tide Museum, historic South Quay, and the King Street area.”

Cllr Bernard Williamson, the cabinet member for regeneration and transformation, who is also chairman of the preservation trust, said: “The borough council will continue to promote our fantastic beaches, great attractions and our varied entertainment, but the conversion of the towers is another way to further broaden the tourism offer.

“We have a good selection of holiday parks and B&Bs, but a medieval defensive tower is a more fitting base from which to explore the borough’s heritage gems, which are sometimes overlooked by residents and visitors.

“And I am sure that a short break in one would prove popular with history fans, bringing more money into the local economy and extra funds to help the borough council to maintain the wall itself.”