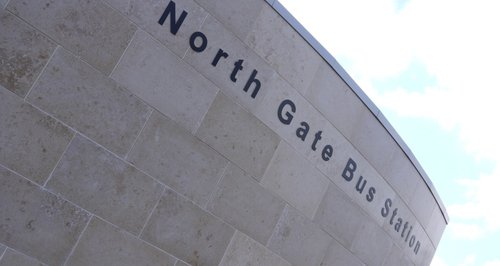 Northampton's new North Gate Bus Station has opened and it's hoped bus users will finally feel welcomed into the heart of the town centre.

The building with its imposing walls have dominated Northampton's skyline for decades, earning a reputation as one of the top three worst architectural eyesores in Britain in the Channel 4 programme Demolition, and nicknamed 'The Mouth of Hell' by the show's presenter Kevin McCloud.

Work started on the decommissioning the old Greyfriars bus station in 2013 with the vast unused offices being cleared. After the last bus left Greyfriars on Saturday 1 March 2014, everything is now set to start the demolition of the building.

Over Easter weekend (18 - 20 April) the bridge to the offices above Greyfriars will be removed. Lady's Lane will be closed during this time to safely remove the bridge. Diversions will be in place and Easter weekend was chosen to cause minimal disruption to traffic.

Councillor David Mackintosh, Leader of Northampton Borough Council told Heart: "Bus users will now arrive in a bright, clean and modern building that is a few steps from the Market Square, Abington Street, Market Walk and the Grosvenor Centre.

"I want shoppers and visitors to feel welcomed to Northampton, not embarrassed by the first impression we offer."

Every year, Greyfriars cost taxpayers £500,000 to maintain, and an independent report showed that Greyfriars would cost almost £30 million to bring up to standard.

The old bus station occupies a huge area of land in the town centre that will be opened up to exciting new redevelopment projects once demolition is complete.

Councillor Mackintosh added: "Removing this costly and unsightly building will free up a large area of land in a prime location for redevelopment and new investment."

Full details about the road closure over Easter weekend will be announced at a later date.

For more information about the work to improve our town centre visit www.northampton.gov.uk/alive