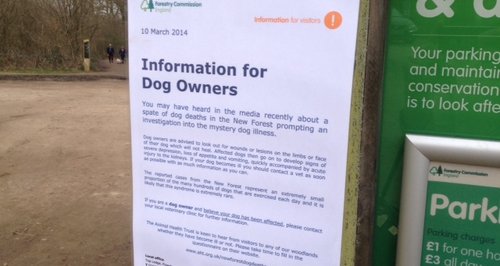 Dog walkers in Northamptonshire are being warned about a case of Alabama Rot thats killed a Jack Russell.

The Dog was regularly walked in Salcey Forest so it's thought he could have picked up the disease from there.

The Forestry Commission have put up signs advising dog owners of the signs and symptoms to look out for but they're not telling them to stay away.

The infected dog was treated at Towcester Veterinary Centre- Cat Arthur is a vet there:

"He came in initially at the weekend with a wound on his foot and was treated normally with antibiotics he was perfectly well but then within two or three day the owner phoned in and said he's just not himself, he's not eating and is starting to vomit.

"Alarm bells weren’t quite going off initially but then when he came in and we saw exactly how sick this dog was, the weight was just falling off him he'd just deteriorated he stopped being able to produce urine, his kidneys were just completely irreversibly damaged and in the end we had to elevate his suffering and that was just five days after he was first presented to us"

Hearts been over to Salcey Forest where one dog walker, Shona Williams, says she wont be returning until she knows it's safe for her dogs:

"We wont be coming back until we know there’s nothing that can hurt them here, its not worth the risk they're just young dogs and we don't want anything to happen to them."

Hearts been told the main warning signs that your dog has the Alabama Rot disease are: