After being found guilty of the four murders of the Ding family in Wootton in April 2011, killer Anxiang Du has been jailed today for at least 40 years.

At a packed courtroom, Anxiang Du has appeared at Northampton Crown Court this afternoon to hear his sentencing.

Before the sentencing, there was a discussion and different views were offered between QCs and the judge on life sentences and how level of pre-meditation of a criminal influences the level of sentence given.

Even though the jury were no longer required for today's hearing, four women jury members have returned to witness Mr Du's fate.

Mr Du had initially sat up in the dock during his appearance but then slumped down in his chair - where he remained for much of the hearing.

The 54 year-old Chinese businessman from Coventry showed no emotion as he was led away from the dock.

In sentencing Du, who stood in the dock staring down at his hands, Mr Justice Flaux told him the jury had rejected his defence of diminished responsibility or loss of control.

The judge said: "What is clear from the evidence and the verdicts is that these were cold-blooded murders which, in my view, were pre-meditated and were considered acts of revenge in which you wiped out an entire family.''

Barristers for Du had argued he should be convicted of manslaughter on the basis of diminished responsibility or loss of control as he was suffering a severe depressive illness at the time of the killings but jurors dismissed the claims.

The judge said: "I'm quite satisfied that hatred and anger and your desire for revenge was what motivated you to act as you did on the 29th of April, not the moderate depression you suffered.''

The judge said he believed Du had formulated his plan on the night of April 28 or the morning of the next day before carrying out the "frenzied attack".

He said CCTV footage that showed him travelling to the Dings' home revealed he was "calm and methodic" and a "man on a mission."

The killings were "savage butchery" with an intent to kill, the judge added.

He went on: "You did not lose your self control in killing Jeff Ding, in effect you executed the man you hated." 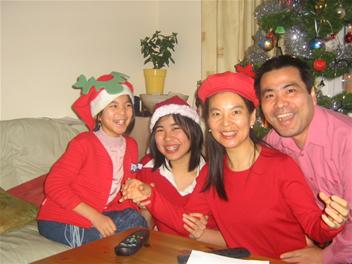