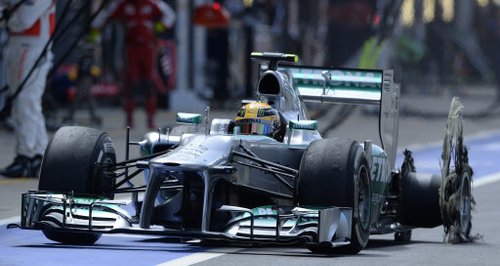 Lewis Hamilton's described as 'unacceptable' problems at the British Grand Prix that led to four cars having tyres seemingly explode.

The Mercedes driver had been leading the race at Northamptonshire's Silverstone circuit on Sunday 30 June 2013 when one of his tyres blew up on Lap Eight.

FIA race director Charlie Whiting said he came close to stopping the race as the exploding tyres threatened the safety of the drivers.

With tyre-maker Pirelli already in the firing line this season, their reputation now is again in tatters, similar to the bits of rubber that were left strewn across the Northamptonshire circuit as four incidents made for one of the most embarrassing days in Formula One's history.

By lap 15, Hamilton, Massa and Vergne had suffered blowouts, with the tyre completely deflating, as opposed to issues earlier in the season when they delaminated, where the rubber stripped away but the belt remained intact.

When Perez, who had already suffered a failure in practice yesterday, saw his race destroyed by another on lap 46, it crossed Whiting's mind to bring out the red flags.

"It was quite close to being red flagged. It did occur to me to do that,'' said Whiting.

When asked if one more tyre failure could have led to the race being halted, Whiting replied: ``I don't want to put figures on it, but it was close.

"I don't think we've seen anything like this (in F1 history). I can't remember anything. To have four total catastrophic failures, I believe, is a first.''

Unsurprisingly, the likes of Hamilton, Perez and Massa were angered by what unfolded, with the former's hopes of victory wrecked by his failure on lap eight that saw him drop to last from the lead before rescuing his race with fourth behind race winner and team-mate Nico Rosberg.

"What happened is just unacceptable,'' said Mercedes star Hamilton, who last month played his part in a controversial tyre test that was supposed to help Pirelli solve their problems.

"We had that test to develop and improve the tyres to stop that from happening, and after that tyre test they didn't do anything.

"Safety is the biggest issue. Someone could've crashed. Behind the safety car I was thinking it was only when someone gets hurt that something will be done about it.

"They (Pirelli) can see what happened today. They have to react to it.''

Like Hamilton, Perez also slated the events as "unacceptable'', with the McLaren driver adding: "We are risking our lives. We shouldn't wait until something happens to all of us.

Vergne, whose incident in his Toro Rosso was arguably the most severe as it occurred at the end of the Hangar Straight at 180mph, added: "I did not feel in danger, but it's a shame this problem can waste a whole weekend's work for the team.

"I am very upset about it, and something needs to be done about it soon.''

Massa, who required life-saving brain surgery in 2009 when a part from another car struck him on the helmet during qualifying for the Hungarian Grand Prix, was only too aware of the evident dangers in today's race.

For instance, Raikkonen was fortunate to escape an accident when a piece of Vergne's tyre landed in his cockpit as the Finn was behind the Frenchman in his Lotus at the time of his tyre failure.

Massa said: "We were lucky that in all the accidents the driver was able to carry on without crashing.

"What happened today was very dangerous for us, for me and for all drivers racing. These incidents are not the first and we need to do something for our safety.''

At the request of FIA president Jean Todt, Pirelli are scheduled to take part in a meeting of the Sporting Working Committee on Wednesday to discuss a number of issues.

The invitation was extended prior to today's events, but given the German Grand Prix is next Sunday, the situation has taken on added significance, with the belief an immediate solution is required.

"We will be on it first thing in the morning,'' said Whiting.

"But they (Pirelli) have to analyse, to try and find the cause of this. But we need to make decisions earlier than Wednesday.''

Hembery added: "We are currently investigating all tyres to determine the cause as soon as possible ahead of the next race in Germany.

"At the moment, we can't really say much more until we have fully investigated and analysed all of these incidents, which is our top priority.

"However, we can exclude the new bonding process, which we introduced at this race, is the cause.

"There might be some aspect to this circuit that impacts specifically on the latest version of our tyres, but at this point we do not want to speculate.

"We will now put together all the evidence to find out what happened and then take appropriate steps should these be required.''