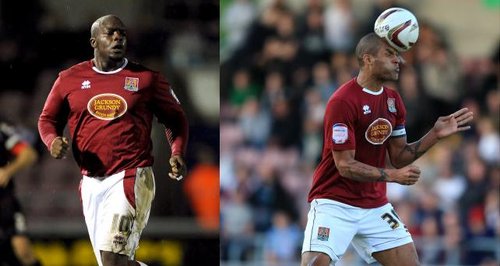 Carlisle is also the chairman of the Professional Footballers' Association.

The messages were sent on May 7 and May 8, after Northampton Town beat Cheltenham Town in the second leg of their League Two play-off semi-final.

Greg Gordon, prosecuting, said the players were "shocked'' and "offended'' by the tweets.

Mr Gordon told the court: "This concerns two tweets by the defendant to two footballers, Adebayo Akinfenwa and Clarke Carlisle. There are racial elements to both tweets.

"Both of these players were shocked and angry by what they received and clearly found it to be very offensive.

"In answer to what he had received, Mr Carlisle retweeted it and responded to it. The defendant was arrested and interviewed the next day.

"He said he had looked at a couple of Northampton Town players on Twitter. He didn't know how to pronounce one of the player's names and sent the messages.

"One says 'monkey boy' - the message to Mr Akinfenwa - and 'coon' is said to Mr Carlisle.''

Townsend, who wore a white shirt and blue tie to the hearing, sent the messages from an iPod at the home he shares with his mother.

The labourer, of Norwich Drive in Cheltenham, Gloucestershire, had 106 followers on Twitter at the time of the offence.

Officers from Gloucestershire Police arrested Townsend on May 8 under the Malicious Communications Act, following an investigation by the force and Northamptonshire Police.

"He is very embarrassed and regretful for what he did,'' Ms Ellis said. ``This is Mr Townsend being sat at home, having had a couple of drinks, disappointed with the result.

"He goes on to his Twitter account. Mr Townsend isn't a Cheltenham supporter - the main team he supports is Arsenal. But being a local he had knowledge of the game. He had a few drinks, he was frustrated and made the comments.''

Townsend, who has a previous conviction for criminal damage, told the court he had written letters of apology to both players.

"I sent them to Northampton Town Football Club,'' he said.

District Judge Joti Bopa-Rai adjourned the case for pre-sentence reports to be made on Townsend.

The judge said: "He has tweeted to the two players who, I have been told, are not white. He has obviously targeted them and that is not behaviour that the courts are going to tolerate.

"It may have only been seen by a few people but these things, when they are in the public domain, can have the ability to snowball.

"One of the players felt strongly enough about what was said to respond. I can't blame him. The words used have racist associations.''

Townsend will be sentenced at the court on 4 July 2013.