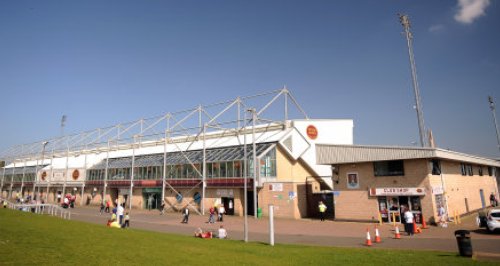 The redevelopment will see the capacity of Sixfields increase to around 10,000 and will see the addition of a hotel, corporate boxes, a conference centre and more.

"We have agreed a redevelopment partnership with Northampton Town Football Club that involves a housing scheme and small scale, local retail development on land, upon which the football club have a 150 year lease, as well as adjacent land near the stadium.

"We recognise it will take a number of years for the profit from this to come to fruition, so to allow matters to proceed in the meantime Northampton Borough Council will loan the club up to £12 million to allow the redevelopment to go ahead as soon as possible.

"We know it has been a really frustrating time for the club and its supporters, so we are very pleased to be able to make this announcement.

"The loan we are making to the football club is not money from the tax payer. As a public authority we have access to funds that the football club don't have and the developments will pay for the stadium improvement. Until then, this loan will allow the club to get started.

"We envisage planning applications for the stadium being submitted this autumn, with a new look stadium ready for the start of the 2014/15 season, or just after. This is great news for Northampton."

"This will take the football club in to the 21st century," said Cobblers Chairman David Cardoza.

"In this day and age you need the opportunity to generate income 365 days a year and this will give us that.

"We plan to build a hotel, a conference centre, corporate boxes, to offer better facilities to supporters, to have office space to let and much more. The plan is to make the club self sufficient in the long term so it is not relying on any one individual.

"The aim is of course also to generate more money from these additional income streams so we can increase the money made available to Aidy Boothroyd and the football side of the club.

"We are hoping to submit planning applications in the autumn and to have a much improved facility here at Sixfields in just over a year.

"The aim is for the club to compete at the highest level possible and this will be a big help.

"I cannot emphasise just how helpful and supportive David Mackintosh and Northampton Borough Council have been. We couldn't have done this without David.

"I would like to thank the supporters so much for their patience, soon we will finally be able to see what we have all been working so hard and hoping for, and we can deliver the town a football club we can all be proud of. We have a fantastic infrastructure in place at the moment, and this redevelopment will allow us to increase and improve that work in all areas."

The deal will be discussed by Northampton Borough Council at its meeting on Wednesday 17 July 2013.