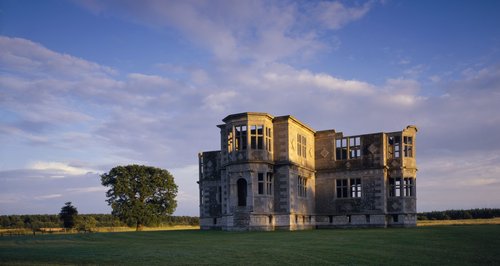 East Northants Council say they're delighted the Court of Appeal has upheld the previous decision of the High Court to quash a Planning Inspector’s approval of a wind turbine development close to Lyveden New Bield.

ENC claim the turbines would have been harmful to Lyveden’s Grade I listed Elizabethan manor house (pictured, courtesy: National Trust), because of the substantial impact on the setting and significance of these heritage assets of the highest order.

The development had been approved by the Planning Inspector on appeal after planning permission was initially refused by East Northamptonshire Council.

The result means that the appeal against the original planning decision will need to be considered afresh.

Ward councillor, Sylvia Hughes, said: "This is a great result for Lyveden New Bield and for the district. Whilst we support the development of green energy, it must not be to the detriment of our valuable heritage sites. I think that the impact on the landscape is a crucial factor when considering a wind farm site and we know that the Lyveden landscape is highly valued by residents and visitors."

Simon Thurley, chief executive of English Heritage, added: "We are very pleased that the Court of Appeal has underlined the vital principle of preserving important historic places like Lyveden New Bield - one of the most beautiful and unspoilt Elizabethan landscapes in England.

We have continued to argue that the original decision by East Northamptonshire Council to refuse the application was absolutely right. The subsequent reasoning of the planning inspector did not pay enough attention to the significance of this exotic jewel in the landscape; to allow turbines here would have had an appalling impact on a very special place. This judgement reinforces the standards of decision-making that must be applied when balancing the need for sustainable energy alongside the commitment to preserve the most important aspects of the nation's heritage."

The National Trust’s Director General, Helen Ghosh, said: "We are committed to renewable energy but it has to work in the landscape.  The Trust aims to source 50% of its energy from renewables, including wind, by 2020, but this shouldn’t be at any cost.  Our core purpose as a conservation charity means we have a duty to protect beautiful places like Lyveden and each wind proposal should be of a scale and location that works with the special qualities of its setting."