Northampton Woman Sets Up 'Mini Hospital' For Protestors In Ukraine 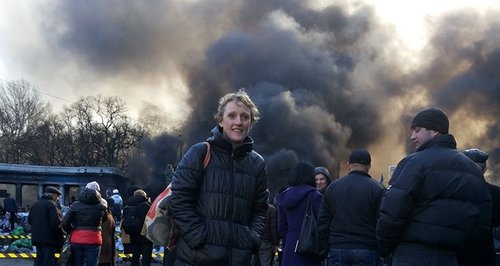 Dozens of protestors have been killed in the violent clashes in Ukraine, between protestors and armed police.

Last month Kiev turned into a battleground as demonstrators were unhappy about Ukrainian President Victor Yanukovych's rejection of the EU proposal bringing their economy in line with Western countries. He was later ousted from power and the tension and violence has continued as Russia brought their troops into the country.

But there has been a little safe haven for those hurt in the demonstrations. It's a 'mini hospital' on Independence Square where the demonstrations have been taking place, set up by a woman originally from Northampton.

Alison Dumbell moved to Kiev last year and has been on the front line giving food and aid to protestors hurt in the violent clashes.

She said she feels compelled to help: "They have given up part of their lives for what they believe in and I've never people who've done that."

Being so close to the violence, there have been times Alison has feared for her life: "There have been only one of or two times when I felt a bit of danger. I was attending a peaceful demonstration and started seeing grenades launched and they lit the tryes on fire so that the smoke would create a smoke-screen to prevent them being shot. I just thought I really must get out of here."

But that hasn't deterred the the mum-of-two from staying in the country.

"Several expatriate families have evacuated and I feel that's unnecessary because I feel safe here.

"Even when I had protestors coming into my house during these battles, I was never scared that my neighbours would inform the police, because the police had so much else to do."