Another New Arrival at Chester Zoo 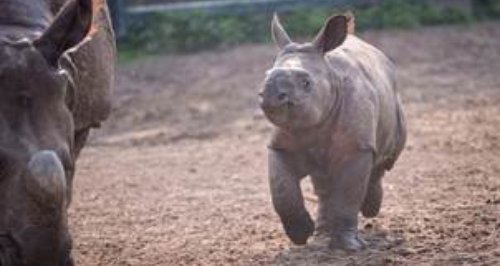 A number of animals have already given birth at Chester Zoo, most recently three black rhino calves in less than a year.

Asha, a greater one-horned rhino also got in on the action, also giving birth.

It’s the first time a greater one-horned rhino, or Indian rhino as they are also known, has been born at the zoo and the female calf – named Komala - has certainly raised a smile amongst the keepers.

Tim Rowlands, curator of mammals, said:  "Our rhino keeping team, and indeed the rhinos themselves, have had the most fantastic few months with three black rhino calves arriving and clearly our Indian rhinos weren’t about to be out done!

“Although we had an inkling that our Indian rhino Asha was pregnant, it was just that, an inkling and a hunch that comes with experienced keepers.

“So, it was a rather marvellous surprise to come in and find that Asha had a big bundle of joy of her own.”

Asha and proud father Beni are all doing well after Komala’s arrival.  “Komala is a proper little bruiser; she has that fabulous, slightly wrinkled armoured plating look that comes with Indian rhinos.

"This is a breeding first for us but also a bonus for the population of Indian rhinos which are yet another rhino species being put at risk as they are cruelly and brutally poached for their horn,” added Tim.