Dolphin in the River Dee 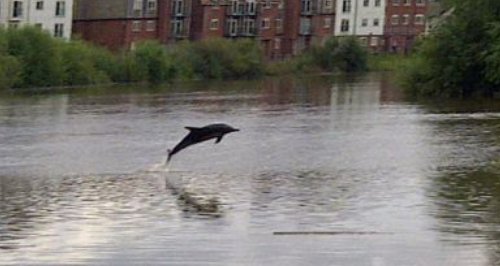 Hundreds have gathered to see dolphin swim as far inland as Chester Racecourse.

The mammal was first spotted near Connah's Quay on Monday, but has today (Wed 21st) swam inland as far as the Chester Racecourse.

Officers from the coastguard have been keeping an eye on the hundreds who went to spot the dolphin while other volunteer agencies checked on it's condition.

An Environment Agency spokesman said:  "It’s likely that the dolphin entered the River Dee searching for food. Our rivers are the healthiest that they have been for over 20 years, because of this we’ve seen an increase in the numbers of wildlife including otters and salmon returning to our waters.”