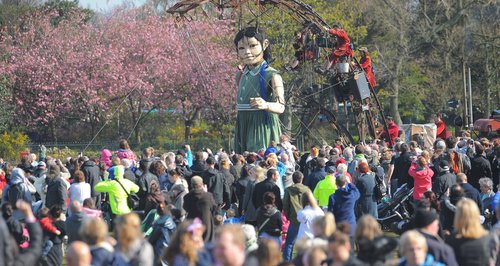 The little girl and her dog Xolo are coming back to Liverpool, in the UK's flagship event to remember World War 1

In 2012, 800,000 people came to the city to see the Sea Odyssey which saw the girl and her dog walk the streets of Liverpool, to find her Uncle.

This year they will return, it's what's being promised to be an emotional story recollecting the start of World War One.

Minister for Sport and Tourism Helen Grant, who is co-ordinating the UK government’s commemorations of the centenary, has confirmed the city will stage 2014’s flagship cultural event, marking 100 years since the outbreak of the First World War. The event is commissioned jointly by Liverpool City Council and 14-18 NOW, the First World War Centenary Cultural Programme.

Helen Grant said: “2014 marks the centenary of the outbreak of a war which transformed not only this country, but the world forever.

“There will be events taking place across the country throughout the four years of the anniversary, but Liverpool will without a doubt be home to one of the largest cultural commemorations.

“This is sure to be a truly powerful and memorable piece of street theatre which will shine a spotlight on an incredibly important period in our history.”

Mayor of Liverpool, Joe Anderson, said: “For Liverpool to host one of the biggest WW1 commemorative event in 2014 is a huge honour in itself. But to once again be working in partnership with Royal De Luxe, makes this extra special.

“We have been in talks with them for some time about returning to Liverpool – but we always knew the story had to be right.

“I know Royal De Luxe will make Liverpool, along with the whole of the UK, proud with the outdoor magic they create, which is guaranteed to be awe-inspiring.

“Sea Odyssey was a truly unforgettable event, and I regularly get asked when the Giants are coming back. I’m sure the news of their return will see another much-needed boost for our local economy.”

Founder and Artistic Director of Royal De Luxe, Jean Luc Courcoult, said: “We are excited to return to Liverpool once again – last time we were given such a warm welcome by the people of Liverpool that all of us felt like we were part of the city’s family!

“Liverpool’s streets are the perfect stage for a show of this kind and we look forward to returning and sharing our World War One story which will hopefully touch all who witness it.”

The full story and route will be announced at a later date, but throughout the event the King’s Regiment and the Liverpool PALS will play a prominent role. There will be a focus on recruitment, and how Liverpool’s efforts impacted on the rest of the country.

This will only be the third time Royal De Luxe have performed in the UK. The first was in London in 2006 when 1.5million people were wowed by the Sultan’s Elephant.

The show will act as the finale for the 2014 International Festival for Business which will see more than one hundred events taking place in June and July with the aim of accelerating UK economic growth.