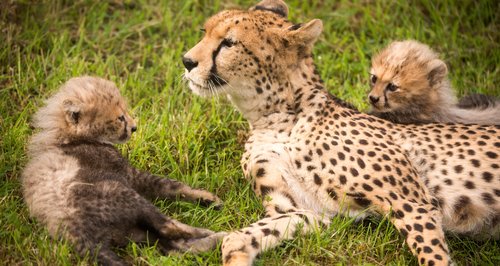 The rare northern cheetah cubs were born eight weeks ago to mother, KT.

They've all be in a special area for the past few weeks allowing them to bond, but now the male and female cheetahs can now be seen by visitors.

Chester Zoo say the youngsters are beginning to develop their own personalities, climbing on tree stumps and bouncing around after one another.

Team manager of carnivores, Dave Hall, said: "They’re very, very playful and a real handful for mum. But she’s exceptionally good with them and doing a great job of bringing them up.”

Over the last 100 years the wild population has plunged by 90% and it is feared there may be as few as 250 northern cheetahs left.

The arrival of the two cubs is therefore not only a cause for celebration in Chester but also the International Endangered Species Breeding Programme working to save the species from extinction.

Chester Zoo’s breeding facility has been set up to replicate how adult cheetahs would find a mate in the wild.