Get To Know Carl Spencer

Find out what song get Carl's moving on the dance floor and who'd play him in a film of his life.

What song gets you on the dance floor?
Robin S - Show Me Love. I love anything from the 90's which reminds me of when I used to go out dancing far more than I do now!

What song reminds you of the most treasured moments in your life?
Ultra Nate - Free. It was huge in Summer 1997 when I passed my driving test. The freedom. I still love my first car, a Blue Vauxhall Nova called Norman! Sadly long gone to the scrapyard.


What makes you feel good more than anything else?
Visiting my two sisters who each have two kids. My two nephews Jimmy and Bobby are terrors and my two nieces Georgia and Heidi are SO well behaved.
Has anybody told you you look like a celebrity? Who?
Yes, apparently I look like: Danny Dyer from Eastenders, the guy that played Frank in Corrie and Josh Harnett. Cant see it myself though.

Favourite film?
The History Boys. It reminds me of being at school. Although I've got Netflix so it changes on a weekly basis.

Favourite place?
There is a swim up bar at the Rui Palace Hotel Cancun that does an amazing Earnest Hemmingway cocktail.

What is your most treasured possession?
My gran wrote me a note when I did my A levels. I still have it 16 years later.

Who would play you in a film of your life?

What is your guiltiest pleasure?
Having flying lessons. I had my first when I was 14. Two of my friends are airline pilots. Hopefully one day I'll be able to afford to get my licence.
Tell us about your ideal weekend.
Friends. Beach. Sunshine. Cocktails. Nice food. Dancing. 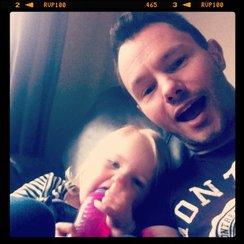