Detectives have released CCTV images of an armed robbery at a Peterborough bookmaker.

The offender threatened staff at Ladbrookes in Lincoln Road shortly after 10pm on Saturday (January 4).

He ordered them to hand over cash which he put into an orange carrier bag before making off towards Oxford Road. 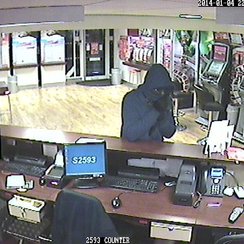 He was described as black, about 6' and was wearing a navy quilted hooded jacket over a high visibility tabard, a black and white scarf pulled over his face and dark trousers.

He also had his hood up.

Detective Sergeant Lisa Alexander said: "I would urge anyone who recognises the offender or has information about the robbery to call police."

Anyone with any information should call DS Alexander on 101 or Crimestoppers, anonymously, on 0800 555111.