Police have released CCTV of a man they want to trace in connection with a robbery in Peterborough, after a man was left with serious injuries.

It happened at about 8pm on February 19 opposite the Late Store, in London Road, while the victim, a 21-year-old man, was speaking to a man.

Another man approached and hit him round the head with an unknown object. He was then punched and kicked by several men before cash and keys were stolen from him. 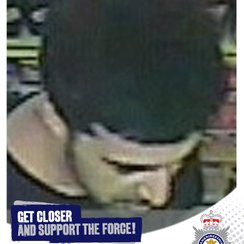 The victim, who then fled the scene, suffered serious facial injuries and was treated in hospital.

Detectives, who are treating the attack as an isolated incident, would like to speak to anyone who thinks they recognise the man pictured as he may have important information.

Anyone with information should contact DC Paul Twell on 101, or Crimestoppers, anonymously, on 0800 555111.