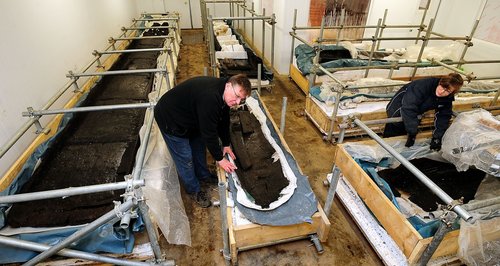 A two year project has started, to preserve several Bronze Age wooden boats that were found near Peterborough.

The 4,000-year-old vessels have been placed in a large refrigerated unit where they will be sprayed with a special wax to stop their ancient timbers from being degraded

It is the same technique pioneered for the Mary Rose Tudor warship.

The eight boats, the longest of which measures almost nine metres long, were discovered by archaeologists as they excavated a section of a quarry at Must Farm near Peterborough in 2011.

This will prevent the boats from drying out too quickly and enable them to be kept in one piece.

Previously log boats have been cut into pieces for conservation.

It is hoped that the process will reveal more about the Must Farm log boats, including how the boats were used.

Visitors to the Flag Fen site will be able to view the boats through glass.

Ian Panter, principal conservator at the York Archaeological Trust, designed the conservation strategy for the boats.

He said: "It's the first time we've had this number of log boats on one site. To under take the conservation with the public able to view it and watch the process develop over the next few years is a great opportunity to see it in action.

We're keeping the boats wet and cold to help keep everything as it is - so there's no biological activity to digest through the timber - to reduce decay of the wood.''

Mr Panter said he believes the boats were used for fishing and transporting cargo along the River Nene.

Carbon-14 tests will be carried out to give precise dates of when the boats were made and could also reveal why they were abandoned in the river.

"I think they had been intentionally sunk but we don't know why,'' Mr Panter said.

The boats are all different shapes and sizes.

The longest is a punt measuring 8.5 metres.

After two years in the refrigerated unit the boats should be stable enough to be put on open display.