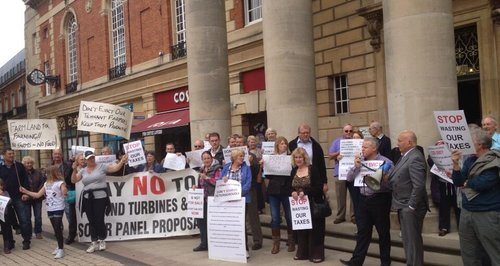 Campaigners have protested in Peterborough, to demonstrate against plans for three solar farms.

The demonstrators told Heart they are against proposals for three renewable energy sites on farmland near Newborough, on the edge of the city.

They gathered outside Peterborough Town Hall ahead of a meeting of the Peterborough City Council Planning Committee today (Monday).

During the meeting, Peterborough City Councillors decided to derer a planning application decision on plans for the first of the three solar farms.

This would be located at Morris Fen.

Council officers had recommended the decision be deferred, after English Heritage raised concerns about potential archaeological remains at Morris Fen.

Archaeological investigations at the site will now take place, before the application is put in front of Councillors on the Planning Committee again.

Eric Pickles, the Secretary of State for Communities and Local Government, has also announced he will investigate the proposals if they are approved by Peterborough City Council.

The City Council says it wants to build the solar farms as it needs to find 'innovative ways' to generate revenue.

However, the Newborough Landscape Protection Group has consistently voiced opposition to the proposals.

We have repeatedly asked Peterborough City Council to investigate alternative plans which would redevelop brown-field sites or regenerate urban areas.

The executive of Peterborough City Council has consistently refused to do so and has used its majority to force through a project which is contrary to their own Local Plans.

We believe that Peterborough deserves a renewable project which redevelops Peterborough and creates local jobs - rather than evicting tenant farmers, surrounding some home-owners in solar-panel prisons; destroying a unique ecosystem and potentially destroying a nationally significant archaeological site."

Instead of raising council tax or cutting services, Peterborough City Council aims to generate in excess of £30m net profit from renewable energy.

This money will go towards protecting and improving the front line services upon which so many people in the city rely.

The land represents less than a quarter of one percent of the agricultural land in Peterborough and the solar panels will be largely screened from view by hedgerows.

Tonight's meeting of the planning committee will determine whether we do further archaeological work before or after a decision is made.

As we have always allowed time to carry out further investigations, we do not believe that the outcome will cause significant delays to the overall programme."